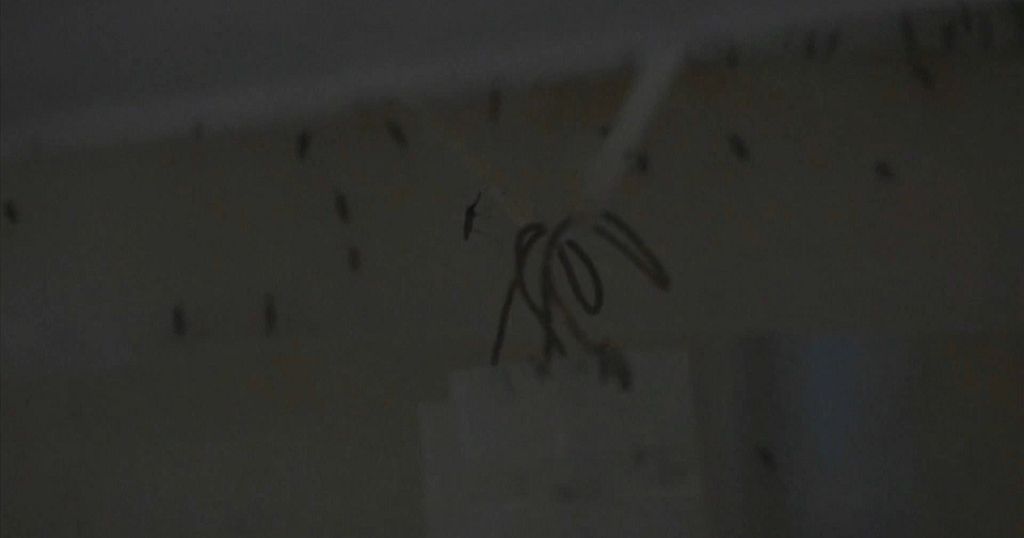 Inside this insectary, at the Uganda Virus Research Institute, a scientist carefully prepares feed for the mosquitoes under their care.

These caged mosquitoes are fed on sugary water and are being constantly monitored by scientists studying their behavior.

Scientists here are investigating whether populations of the malaria-carrying insects can be reduced by genetic modification.

They’re looking at the viability of releasing large numbers of genetically modified mosquitos into the wild to influence future generations.

The study is being led by scientists here at the institute in Kampala with researchers from the Target Malaria group.

Dr. Jonathan Kayondo is the principal investigator managing the project.

He says the disease can be deadly for children, especially those under five-years-old.

“The aim here is to develop a new vector control tool for the suppression of malaria transmission,” says Dr. Jonathan Kayondo.

“And of those, we have partners that are based in the endemic countries and Uganda is one of the partner sites and the Uganda Virus Research Institution is the base of this work in the country.”

Researchers in Burkina Faso released thousands of sterile male mosquitoes into the environment in 2019, in a bid to see how the overall population of mosquitoes can be suppressed.

Scientists here are hoping to introduce a genetic change in a protein, which would be carried over into the mosquito’s offspring.

The scientists must navigate tough questions relating to bioethics, including queries about how such mosquitoes might interfere with the balance of the natural ecosystems.

“We would then try to engineer a modification and target specific genes in the bodies of the malaria transmitting mosquitoes that can disrupt the ability to reproduce,” says Kayondo.

“And this is via a way of biasing the sex ratios to mostly males, or somehow affecting female fertility in one way or another, but ultimately the end game is a tool that’s able to spread those modifications in a disproportionate rate.”

No one knows how the modified mosquitoes will behave in the wild, but Dr. Kayondo hopes the outcome will be fewer female Anopheles mosquitoes, which transmit the malaria parasite.

“We really do not have an actual number that how many will be released, all we can tell is we can look into cage studies, but those are not (in) nature (natural world) and we know that from cage simulations we could be able to achieve a fixation of the drive, depending on the different numbers that you seed with, and this could range from two to three years or so, but in nature, to really get a proper handle, we need to first have collected the data, which field entomologist studies will have to bring in, and then we tie that then we are able to estimate,” he says.

The multi-million-dollar project is being bankrolled by the Bill & Melinda Gates Foundation as well as the San Francisco-based Open Philanthropy Project.

The Uganda project is still in its infancy. Scientists plan a study with a limited release of mosquitoes in 2026, and a larger one in 2030.

The study is being criticized by environmentalists who want it banned.

Frank Muramuzi of the National Association of Professional Environmentalists claims the program hasn’t been properly discussed and he’s urging scientists not to proceed.

In Uganda, the introduction of DDT (Dichloro-diphenyl-trichloroethane) insecticide was also contested by environmentalists because of its impact on the environment.

Muramuzi believes the money being spent on research to modify mosquitoes should be channeled to create awareness of the disease and alternative methods of prevention.

“We don’t know what is driving all those efforts put on the mosquitoes. If it is money, why can’t government use that so much money, and manufacture medicines and create other mechanisms that will reduce the prevalence of malaria?” he says.

The project, which is regulated by a local board, operates legally under the Uganda Virus Research Institute, and authorities have not stated any objections as research continues in the lakeside town of Entebbe, some 40 kilometers (24 miles) from Ugandan capital, Kampala.

A bill that would address the handling of genetically modified materials has languished in Uganda’s legislature for years, effectively vetoed by a president who wants criminal clauses punishing scientists whose creations eventually prove destructive.

Researchers all around the world are looking at ways to genetically alter mosquitos to reduce their populations. In 2019, hundreds were released in Florida as part of a study.

Africa, according to the WHO, carries “a disproportionately high share of the global malaria burden,” accounting for 94 percent of all cases in 2019.

That year, the disease killed more than 380,000 people across the continent.

Kayondo knows he faces many questions about the unintended consequences of genetically modified mosquitoes on the environment, including on mosquito-eating creatures such as birds and frogs.

The head of Uganda’s malaria control program, Dr. Jimmy Opigo told The Associated Press the benefits of such research outweighs the potential risks in a country where malaria kills 16 people per-day, according to national figures.

Opigo, who is not involved in the project, said it faced a setback last year when it was “chased away” by locals in a village where researchers wanted to setup a research station.

While the genetically modified mosquitoes will “not be a magic bullet,” Opigo said the project offers hope for eradicating malaria in countries where the disease is endemic.

Last year, the WHO said it “supports the investigation of all potentially beneficial technologies, including genetically modified mosquitoes.”

The head of the WHO’s program for research and training in tropical diseases, Dr. John Reeder, in October spoke of the “need to think about new tools that could make an impact.”

Kayondo defends the project’s work in Uganda, asserting that it’s more cost-effective and sustainable in the long term to weaponize mosquitoes as a complementary tool in fighting malaria.