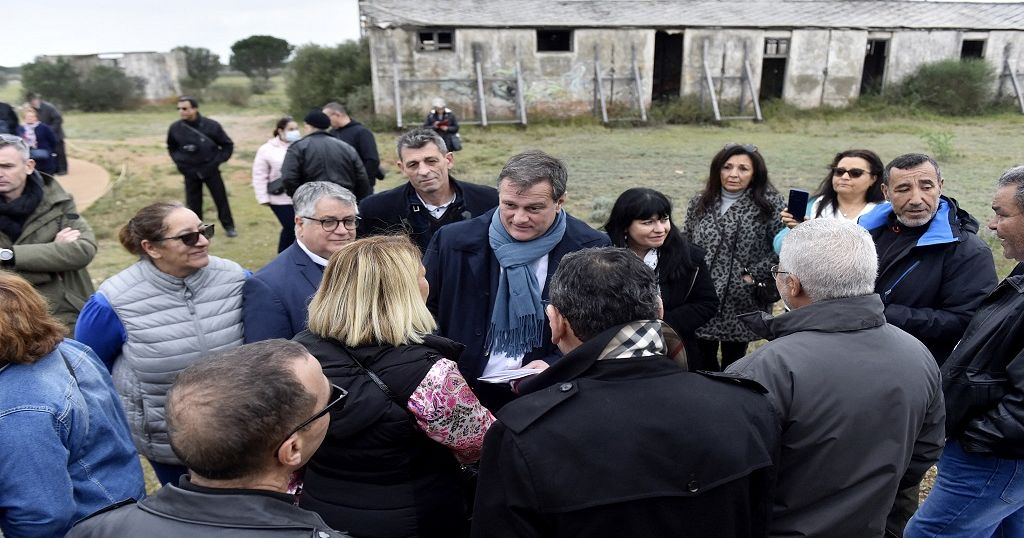 Some 300 harkis and their descendants gathered in front of the Rivesaltes camp memorial in the Pyrénées-Orientales region to ask the State to restore their honour, beyond the “pardon” law, which was compared to “crumbs”.

In order to turn the page without tearing it apart, “we ask politicians for a law of reparation commensurate with our suffering, for all”, says Hocine Louanchi, president of the Confederation of French Muslims repatriated from Algeria and their Friends.

The harkis were recruited as auxiliaries to the French army during the Algerian war of independence (1954-1962).

At the same time in Paris, President Emmanuel Macron commemorated the 60th anniversary of the Evian Agreements and the ceasefire in Algeria, pleading for an “appeasement” of memories on both sides of the Mediterranean.

“We are here to denounce the date of our massacre. March 19, 1962 is not the end of the war. March 19 is the date on which France disarmed my father and handed him over to the enemy,” said Hocine Louanchi, president of the Confederation of French Muslims Repatriated from Algeria and their Friends, which organized the rally.

Up to 200,000 harkis were recruited as auxiliaries to the French army during the Algerian war of independence (1954-1962), but in the aftermath of the Evian agreements, the French government rejected their mass repatriation.

“To turn the page without tearing it apart, we ask politicians for a law of reparation that is commensurate with our suffering,” hammered the septuagenarian who lived for nine months in the Rivesaltes camp.

He was referring to the so-called “pardon” law, passed in February in Parliament, which opens the way to compensation.

“Crumbs!” enraged Mr. Louanchi, still deeply traumatized by the fate of his father, “arrested and tortured” in Algeria after “his abandonment by France.

Only 42,000 harkis were evacuated to France by the army. Others arrived in a clandestine way, and in total, about 90,000 people arrived in France between 1962 and 1965, notably in camps, where children lost their lives for lack of care.

The law, which recognizes “the unworthy conditions of reception” in France, provides for financial “reparation” for the damage suffered by those who passed through these camps. The number of potential beneficiaries is estimated by the government at 50,000.

“This law is equivalent to writing in stone a discrimination against the same community of fate,” says the woman with black eyes, believing that the text excludes a large part of the descendants of harkis, who did not necessarily live in the camps, but “who suffered as much.

A little further on, a 70-year-old woman shows a friend the concrete barracks where she lived, now eaten away by vegetation. “Remember, we slept on pallets. We were so cold!” recalls Abessia Dargaïd.

Her twin brothers, born in the camp, died there.

“I would have liked my daddy to be there to listen to Macron’s forgiveness,” says the septuagenarian, bursting into tears. She believes that the law of “reparation” came too late.

Sitting on a bench, a white scarf covering her hair, Zinel Aggabi, 83, murmured: “It’s painful to come back here. Everything comes out at once. Too many horrors, too many horrors.”

The only good memory of the Rivesaltes camp, where she arrived when she was 20 years old, “is that I met my husband there,” smiles the old woman.

For her, as for all the harkis, their wives and children, Mr. Louanchi demands “the restoration of their honor. “We have to go down in history, they can keep their forgiveness”, he asserts, bitterly, asking France to grant the Legion of Honor to all the harkis still alive.

“And to make this voice heard from the Rivesaltes camp, “the high place of our sufferings”, was essential for him,” she said.

A choice that Fatima Besnaci, historian and co-founder of the association Harkis and Human Rights, does not understand. “Carrying political claims in a place where people have been buried in a hurry seems to be a huge gap,” she said.