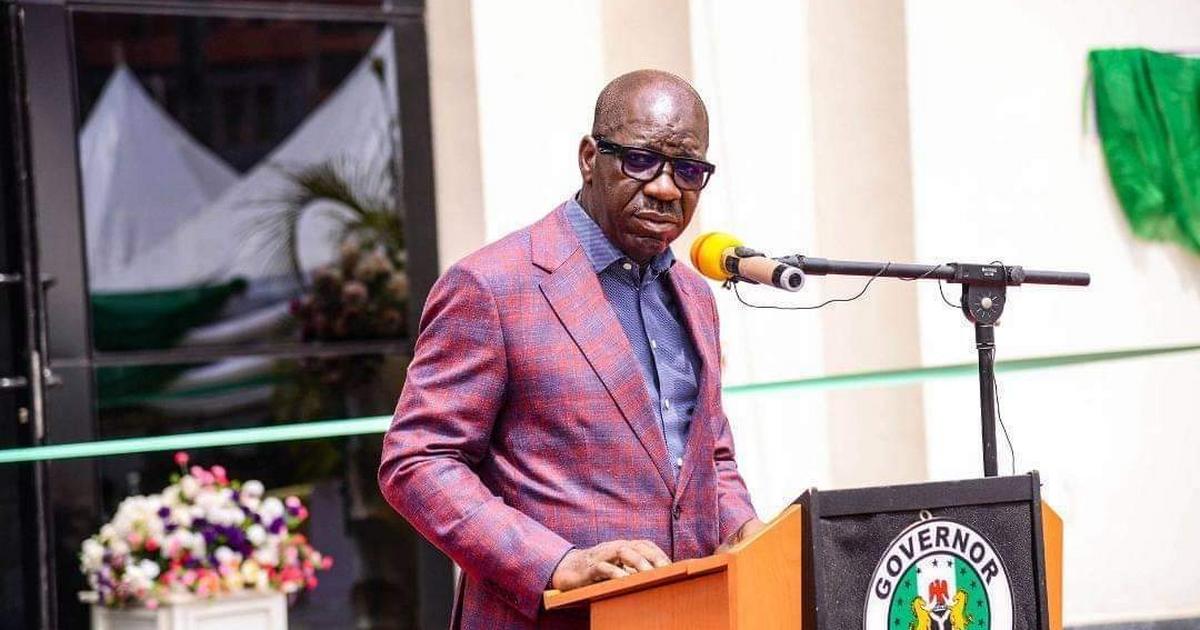 Obaseki in a statement signed by him described Wike’s outbursts on Shuaibu as most unfortunate and totally uncalled for.

Wike berated Shuaibu’s political relevance, saying who is he to threaten the PDP with a defection.

But in the advertorial titled “Obaseki to Wike: PDP is not your personal property, Edo cannot be procured”, Obaseki fired back at Wike saying he won’t tolerate bullies.

The statement reads: “The recent personal attacks by His Excellency, the Governor of Rivers State, Rt. Hon. Nyesom Wike, against my Deputy Governor, Rt. Hon. Comrade Philip Shaibu is, to say the least, most unfortunate and totally uncalled for.

“If Governor Wike was one who wants to show respect and courtesy to his colleague-governors, he would have ordinarily reached out to me to express his concerns about the views made by my deputy governor, rather than embarking on this unwarranted public onslaught.

“My deputy governor was a former National President of the National Association of Nigerian Students (NANS) and his comment is representative of the essence of the nation’s youth population, who are inclined to openly speak up and question the status quo. If Governor Wike cannot understand and adequately respond to the style and character of the Nigerian youth, how can he aspire to lead them?

“His Excellency, Governor Wike should have taken a cue from the manner in which the National Chairman of our party, Sen. Dr. Iyorchia Ayu, responded to my deputy’s remarks, as a conscientious leader who is able to show empathy and consideration.

“The concerns expressed by my deputy governor bordered on pertinent issues affecting the PDP in Edo State which since the September 19th 2020 elections, has been able to register over 500,000 members; and to date, these new members have not been properly integrated into our party after two years. Also, the leaders, executives and members who came with me into the party have still not been accepted, integrated or harmonized into the party.”

“It is necessary to recall at this point that a political solution gave rise to the emergence of Chief Dan Orbih first as Acting and then as Substantive National Vice Chairman, South South, of our party, when Chief Emma Odidi resigned that position to allow Chief Orbih to ascend. It is therefore curious why this type of political solution is no longer tenable to resolve the political impasse in Edo State PDP.

Obaseki also dismissed Wike’s claim that Shuaibu threatened to leave the PDP, saying his deputy did not at nay point threaten to leave the party.

“Undoubtedly, Governor Wike has contributed to the advancement of the party, just like others, since 1999. No one is against his desire to run for president, however, his ambition should not be embarked on in such a way that it would cause disruption at different levels, such as the PDP Governors’ Forum as well as different chapters of the party across the country.

“While Governor Wike is free to use his resources as he deems fit in pursuit of his ambition, he should not attempt to cow, intimidate, cajole and threaten others into doing his bidding. Edo State cannot and will not be procured for anyone’s personal ambition.

“In Edo, we don’t accept political bullies and overlords and historically, we have demonstrated our capacity to unshackle ourselves and dethrone bullies and highhanded leaders.”

Obaseki also called on leaders in the PDP to prevail over Wike to “desist from .his current unguarded and disruptive tendencies.”