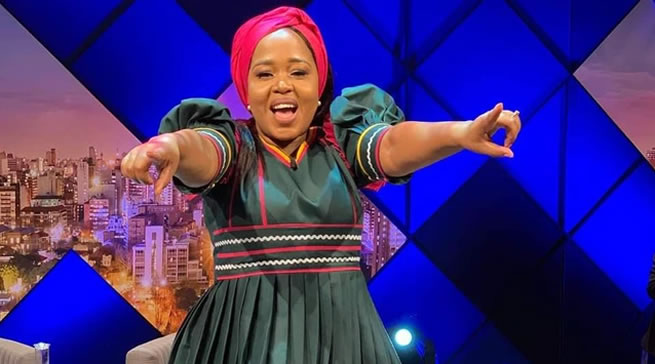 Gospel musician and TV presenter Winnie Mashaba has separated from her husband of 16 years. The O Mohau Messiah hitmaker has also allegedly dropped Makgogo Makgopa from her management team and is now being managed by Tswako Music and Projects, which is owned by Makgopa’s nephew Khaitjadi.

The Amahubo Gospel series presenter declined to comment on the separation this week, saying she did not want to discuss her private life out of respect for her in-laws and “any possible future in-laws”.

Mashaba added: “Also, the family I might marry into in the future … I don’t want to carry the baggage [into it] and be labelled as the wife who spreads her family affairs in the papers. I respect people’s feelings a lot,” she said.

Sources close to the Limpopo-based musician claimed the marriage had broken down after years of infidelity and irreconcilable differences between the singer and the businessperson.

“Things got worse last year when Winnie started questioning a close relationship between one of her backup singers and her husband. They were extremely close and it became worrying because at some point there were rumours that they were having an affair,” the source said.

Mashaba, who still wears her wedding band to “distract fans from her divorce”, apparently filed for divorce in 2017, but did not proceed with it for reasons that are not known.

A source said:
She doesn’t want anyone questioning her marriage, that is why she is still wearing her [wedding] ring.

Mashaba and Makgopa were married in 2005 and do not have children together.

Another source close to Mashaba’s husband said that, in the main, Makgopa was seriously affected by a close relationship between his wife and a singer only identified as Khelobedu.

“Those two were very cosy and even if you google their names, you will see that they were very close,” the friend said. “So even in private they were as close and, as a married man, how can you be comfortable with your wife going up and down with a well-known showbiz Casanova who is single?”

Mashaba denied that a bandmate was the cause of the breakup of her marriage.

“I am still with my band. We are doing good. There is nothing like that,” she said.

The popular musician said she would not share details about her private life:
I prefer my private life to remain just like that … One day they [fans] will know about my life, but for now we will remain private. Whether I get married again for the fifth or 10th time or I separate 10 times, it will just remain private because I never published that I was getting married.

In 2019, the a multiaward-winning musician opened up during an interview with Drum magazine about suffering two miscarriages.

“After two miscarriages, I gave everything to God,” she said then. “Sometimes I joke and say maybe Modimo [God] knows, if He gives me children now, I’m going to neglect the other responsibilities I have,” the singer told the publication.

In explaining her decision to share those intimate details of her life then, she told City Press: “The only thing I have published is the one I felt I had to share with many women with regard to my two miscarriages. That is the only personal thing that I remember sharing; anything else and where they [the details] come from, I don’t know.

“I have been reported dead and have been declared mentally disturbed in [media] reports a couple of times. So let’s just say that it’s one of those things that people say. If I have a problem and want to talk [about it], I will give you a call but other than that, I would advise that you just don’t listen to everyone.”

Another source claimed that the star was currently going through counselling to deal with the separation.

By the time of going to print, Makgopa had not responded to requests for comment.