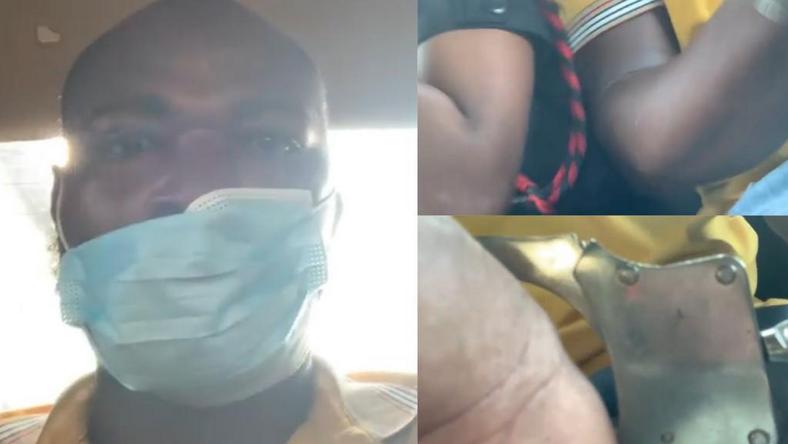 The actor, disclosed this in a post this morning where he shared a video of his hands handcuffed whilst in a vehicle with a police officer. According to Funny Face, he was being dragged to a circuit court in Ofankor.

“GYE NYAME, jailed again yesterday afternoon … till dis morning … been taking to Ofankor circuit court,” the actor captioned the video and added that ” GOD is in control” whilst informing “funny fans’ to “spread dis video … justice for funny face“.

In the post below, Funny Face did not reveal the reason of what has caused this arrest that warranted a court appearance.

However, this becomes the second time the actor has been arrested in the past seven days. Funny Face was picked in the middle of a street in Kasoa on February 8 for causing a disturbance in a bar after he lost a fight.

According to the Ghana Police, Funny Face was granted bail. The Central Regional Police PRO, DSP Irene Serwaa Oppong detailing what caused his first arrest told Joy News that Funny Face had gone to the bar where a misunderstanding ensued between him and the owner.

She said although the two were separated, Funny Face went home and returned with a gun, and fired warning shots. Funny Face filed a police report against the owner of the drinking pub for assault after sustaining injuries during the fight.

DSP Irene Serwaa Oppong added that the bartender was also arrested for assaulting Funny Face but granted bail whilst police continues investigations into the reports.