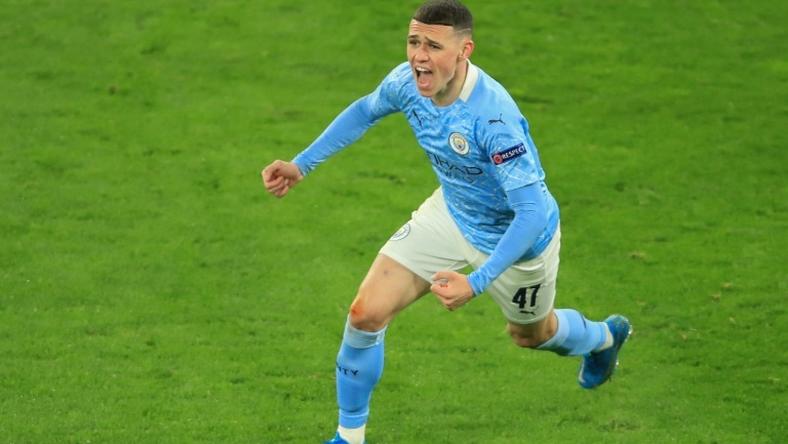 Attention will now turn to a semi-final clash with Qatari-owned Paris Saint-Germain that will be a meeting of two projects financed by Middle Eastern investment.

But for all the money invested by City’s Abu Dhabi owners, it was a product of the club’s youth academy, Phil Foden, who came up with the goods as nerves frayed for Guardiola’s men.

However, that was cancelled out by another burgeoning young English star when 17-year-old Jude Bellingham’s first Champions League goal gave a Dortmund a 1-0 lead on the night and the advantage in the tie on away goals.

As chances came and went before half-time, Guardiola would have been forgiven for having a fear of history repeating itself.

City have bowed out on away goals twice in his previous four seasons, while a combination of controversial refereeing calls and defensive mistakes cost them in three successive quarter-final exits to Liverpool, Tottenham and Lyon.

This time, though, City’s luck turned as a Foden cross was handled by Emre Can inside the box and VAR did not intervene to overturn Spanish referee Carlos del Cerro Grande’s decision.

“This competition is nice but at the same time is so unfair because when you are out, it is judged a disaster when you play 11 months for the league, FA Cup, League Cup, for everything,” said Guardiola, whose side remain on course for the first ever quadruple in English football history.

“Today was a penalty with a hand and maybe could be not given. We were out against Tottenham (in 2019) for a hand by (Fernando) Llorente that was not given.”

‘A guy who never hides’

A missed penalty also cost City in that tie against Tottenham, but this time Riyad Mahrez converted the spot-kick.

Foden then took centre-stage with a powerful drive in off the inside of the post 15 minutes from time to guarantee City’s place in the last four for just the second time in their history.

By scoring, the 20-year-old also became just the second player under 21 to score in both legs of a Champions League quarter-final after Kylian Mbappe, who he will face in the semi-finals.

“You have the feeling he is a guy who never hides,” Guardiola said of Foden.

“He always creates something. He is dynamic offensively, defensively and in the small spaces.”

Foden also provided what City needed as he is a fresh face, unburdened by previous Champions League failures.

Ilkay Gundogan admitted the runaway Premier League leaders “were scared to lose something” in a slow start that allowed Dortmund to take the lead.

The relief at turning round what could have been another nightmare European night was evident as Foden ran into the arms of Guardiola and was swamped by celebrating teammates after the second goal.

“For the club, it is so important,” said Guardiola, the former Barcelona and Bayern Munich boss. “We cannot deny it. This competition is tough mentally.

“You are working for 10 months and for one goal. One mistake, you are out.”