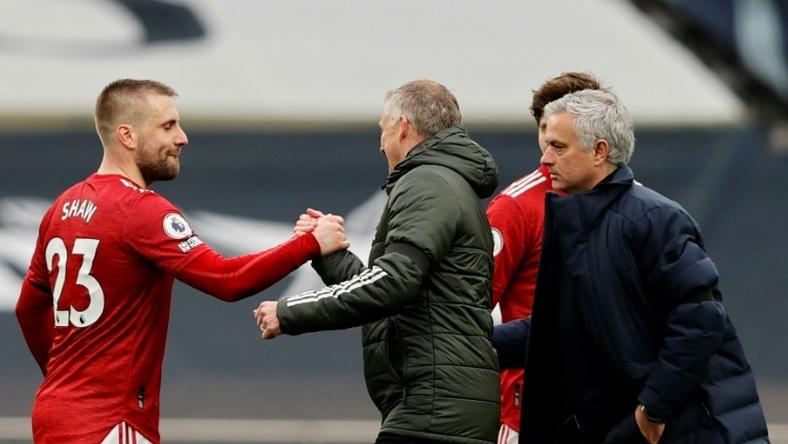 Son opened the scoring for Mourinho’s men before second-half goals from Fred, Edinson Cavani and Mason Greenwood inflicted another damaging defeat on Tottenham’s chances of a top-four finish in the Premier League.

However, it was Son’s role in a first-half goal by Cavani that was ruled out after a VAR review that sparked a war of words between Solskjaer and his predecessor at Old Trafford.

After reviewing the incident on the pitchside monitor, referee Chris Kavanagh awarded Tottenham a free-kick for a foul by Scott McTominay as he made minimal contact with Son’s face in the build-up.

“If my son stays down like this for three minutes and needs his 10 mates to help him up, he won’t get any food,” said Solskjaer of the South Korean international, who was back on his feet to open the scoring four minutes later. “We weren’t (conned), the referee was.”

Mourinho took issue with journalists at his post-match press conference for not asking for his reaction to Solskjaer’s comments.

“If it is me telling that player A, B or C from another club if it was my son, I wouldn’t give him dinner tonight or something like that, what would be the reaction?” asked Mourinho.

“In relation to that, I just want to say that Sonny is very lucky that his father is a better person than Ole.

Two-and-a-half years on from his sacking by United, Mourinho’s job is under scrutiny again.

Spurs are now six points adrift of fourth-placed West Ham and could fall to eighth in the table if Everton win at Brighton on Monday.

Failure to qualify for the Champions League could also have consequences for the future of Harry Kane after reports emerged this week that the England captain would be keen to leave if Spurs missed out on Europe’s premier club competition for a second consecutive season.