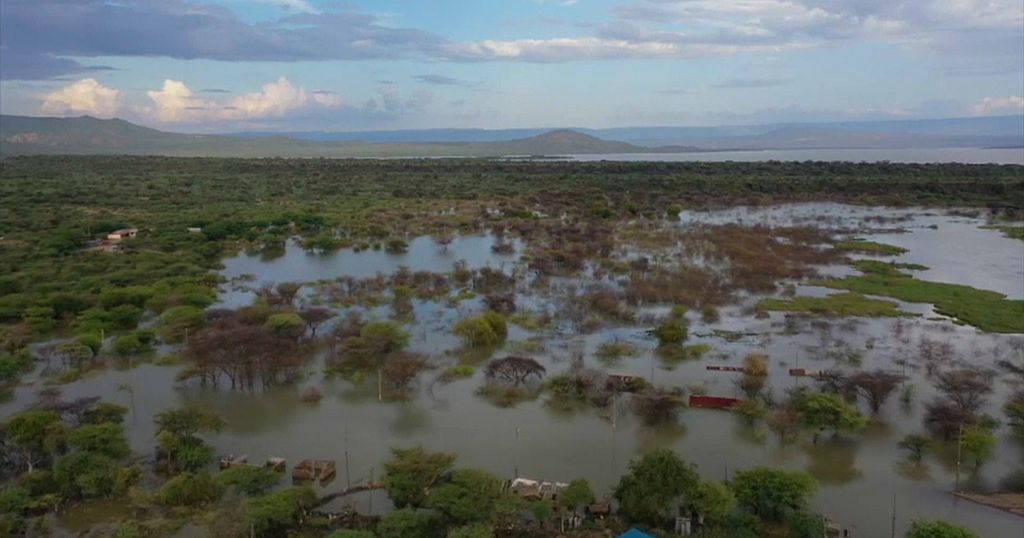 For over a decade, the lakes of Rift Valley have been swelling, swallowing land and villages.

Villages are sinking, schools, places of worship, highways, and farms.

Hundreds of families and thousands of wildlife are under threat as water levels of lakes along the Rift Valley basin continuously increase.

Most vulnerable of all is the El Molo ethnic group, one of the smallest in Kenya, living on islands in Lake Turkana, a lake on the northern side of Rift Valley.

“Our home in Choro, Namukuse and Longech Islands are now underwater. We don’t have a place to stay right now. We were rescued by well-wishers in boats to the shores of Kalokol. Our home is in the middle of the lake,” he says.

The region has always been unstable geologically, its name refers to the fracturing of the Earth’s crust, where two tectonic plates collide.

But now, deforestation in the highlands has decreased the permeability of the soil and recent heavy rainfall has swamped much of the low-lying land.

Scientists say heavy rains in East Africa made 2019 one of the region’s wettest years on record, the water drains into the lakes.

Without the forests, the rain erodes the land, washing tones and tones of silt into lakes.

This clogs the underground drainage fault lines that means water cannot drain out of the lakes, causing water levels to rise dramatically following the 2019 rainfall.

“One of the communities that has been ‘impactly’ affected is the El Molo community which has lived within Lake Turkana and has existed there depending on the lake and even the Island around there. Currently the Island has been submerged by water and the community is displaced and we don’t know whether this community will be able to survive or cope up with the new ecosystem,” he says.

Lake Naivasha waters, for instance, have claimed more than one kilometre inland since 2019, according to the Kenyan Ministry of Water and Fisheries.

This animated map shows the increase in water levels at Lake Naivasha Crescent Island between 2001-2021.

Limo is surveying the flooding in Lake Naivasha with local Stephen Kuria.

“The water was filling in slowly such that nobody thought it was that serious. So, people were not cautious that these waters will one day flood their houses and businesses. So, they were not careful to stow away their wares. So, after one month is when water got into those houses over there and that’s when people started demolishing and rebuilding on this upper side,” he says.

Hippos and other wild animals have invaded the area and can pose a danger to people.

“This water can retract, but future rains might bring it back there and find people and displace them again. So, if they can be compensated and go a little further from the lake. Because now wild animals have invaded the area, there are buffaloes, there are hippopotamus which may attack the people. So even if water will go back, people can be attacked by animals, and even snakes, because snakes have also come and can attack them,” he says.

“These losses are basically because of the losses in terms of the schools, displacement of human beings, and also loss in terms of capital, that is the construction of buildings within here, and even indirect losses as a result of businesses that have been lost around the lakes.” says Limo.

All that can be seen are submerged homes.

Owners are making do with makeshift tents, hoping nature will have mercy and retract the waters back to their original levels.