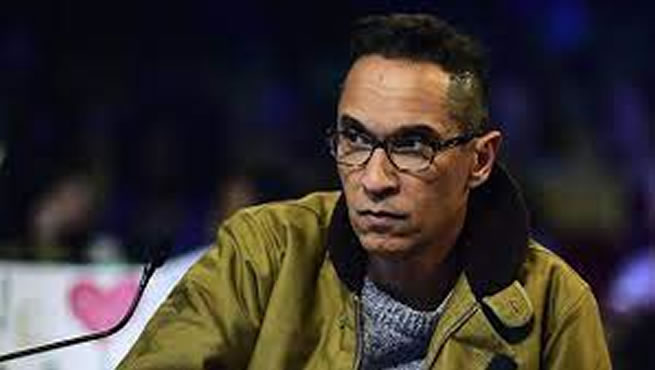 If you consider the length of time Randall Abrahams has been the judgiest of judges on Idols SA — 17 seasons — you would be struck by the idea that he could have fathered the equivalent of an Idols teenager by now.

It’s like he had the baby and the bathwater and is now in the thick of the adolescent drama his rather precocious progeny is bringing.

With a laugh he responds:

“That seems apt, and rather like me. I started out a certain way, I was always going in a particular direction and took a circuitous route to get there. For me, going to school was by the way; it was always about the music,” he says.

He has the peculiar distinction of being the longest-tenured judge on the Idols panel.

“I was there from day 1. Idols is compelling because it is about personalities and ambition but is also essentially a singing competition. We have had 17 great seasons, and at the risk of sounding cheesy, I have honestly loved every second.”

I am meeting Randall at the Salvation Café at 44 Stanley in Milpark in Johannesburg. It feels like a Covid-19 holiday here, the courtyard cafe beneath the trees is thriving with signs of very real life and human energy.

Also, it is right next to Randall’s happy place: Mr Vinyl, a well-stocked record shop and haven for certified music nerds.

They do a very credible Joburg version of High Fidelity in there. But for now we order Thai fish cakes for him and Vietnamese rice wraps for me and shoot the breeze about the fact that Randall doesn’t really drink but has a very pronounced affinity for cookies.

At the moment he is in a lemon-and-white-chocolate cookie phase, which is being bolstered by the fact that he found a supplier of his favourite Italian delicacies at the neighbourhood fruit and veg store.

He is a man with clear convictions about what is good — as we all know. And he is unflinchingly faithful to his tastes, ranging from cookies to his feelings for Elvis.

I wonder what his thoughts are about the recent revelation that Elvis was an undercover narcotics agent for Nixon? I wonder no more. Randall fills me in.

In detail, with some Elvis-like voice-overs thrown in to embellish the story. It is a wondrous tale about a long- lost era when celebrities, or maybe only ever Elvis, could decide to drive up to the White House gate unannounced and get an impromptu hearing with president Richard Nixon.

Immediately, as well as being given the federal narcotics badge, which he desperately wanted to facilitate his own transportation needs across state lines, without the attendant bothers.

To get said badge he spun a story Nixon wanted to hear — involving the nefarious influence on the youth of those British drug culture reprobates, The Beatles.

“I think he half believed it and half could manipulate any situation,” says Randall authoritatively.

I could go into more detail — as indeed Randall did, but we don’t really have space in this column. What I can say is that Randall’s font of factual information about subjects close to his scary intellect and musical heart runs deep.

So don’t try to pull a fast one on him or he might give you that unnerving judgmental look that we have come to know and love on national television.

I, unfortunately, am the recipient of just such a withering look when I ask him for his thoughts about former fellow judge Somizi’s troubles. It’s enough to make me pull out of the hot lunch.

He answers diplomatically. “I have a professional engagement with Idols. Decisions that get made are not mine to make.”

And I very swiftly move along. All the talk of celebrity culture leads me to question how he handles his own. People are clearly aware of him at lunch — it may have something to do with the familiar ’50s coif that he sports.

“I learnt to stay out of the public eye; my private and public life are mutually exclusive.”

I ask whether this extends to his public persona. Is he putting on an act when he does his acerbic thing on Idols? But he maintains that is not the case: what we see is what we get.

“I have been myself since day 1. For me to get emotionally connected is redundant — the public is going to vote and you cannot legislate taste. So I can only play my role and give insight to aid the contestants. We never know who people will fall in love with — some personalities are more compelling and voters still make their decisions.”

How has the musical taste of the competition changed over the 17 seasons?

“When we started it was Britney Spears and Atomic Kitten, but it has always been about contemporary music tastes. Yes, it has changed, but its identity has remained consistent and the same — that is why it is such a successful model. So now they sing Billie Eilish and Cassper Nyovest. The trick is to use the platform to your advantage, before the show no-one knew your name.”

“Are you on the slightly misanthropic end of the spectrum?” I venture.

He laughs and confirms that the Covid-19 lockdown was not so very hard for him. He could dedicate himself to his pursuits without interruptions. Reading, film, series and, above all, music.

He still has his mother’s piano. She brooked no questions when he was growing up and had to learn to play it. “There was no no-learning the piano. She was very strict.”

We become more pensive when he considers the toll Covid-19 has taken.

“I recommended my brilliant double bass teacher to a friend and he was not answering his phone. It was a terrible realisation to make. The most important thing we can say is that we are healthy.”

What is he going to do once he can travel again? Need I ask?

“Go to hear the bands play.”