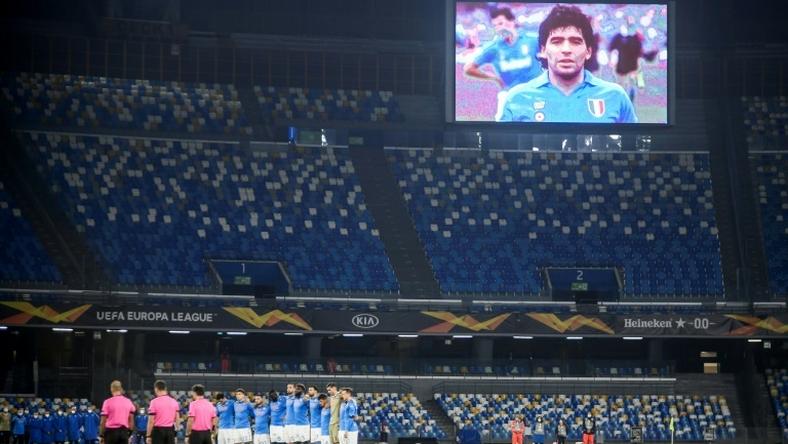 In Italy, where the Argentine led Napoli to two Serie A titles, the competition unveiled detailed plans to commemorate Maradona, who died on Wednesday aged 60.

During the minute’s silence before games the message “Ciao Diego” will be projected onto the empty stands.

The players will wear black armbands and in the 10th minute the image of Maradona, who wore the number 10, will be displayed on stadium video screens for 60 seconds.

Players in England’s Premier League will also wear black armbands but instead of a silence, players and officials will applaud for a minute. Fans will not return to English top-flight grounds until the following weekend.

In Spain, where Maradona played three seasons, one of his former clubs, Barcelona, formed a circle before training on Friday and observed a minute’s silence with club captain Lionel Messi, who played for Argentina when Maradona was coach, bowing his head.

There will be a minute’s silence before La Liga games over the coming days and players will wear black armbands.

The top two German divisions will observe a minute’s silence before games and players will wear black armbands. Maradona never played in the Bundesliga but he faced Germany in two World Cup finals, winning in 1986 and losing for years later.

The French League said players would form the letter “M” in the central circle for the minute of silence.

Ligue 1 also said it was looking for an appropriate piece of music to commemorate Maradona as the teams enter the field before games.

The top two leagues in the Netherlands have also announced a minute’s silence.

UEFA observed a minute’s silence in memory of Maradona before the Champions League and Europa League matches played on Wednesday and Thursday.