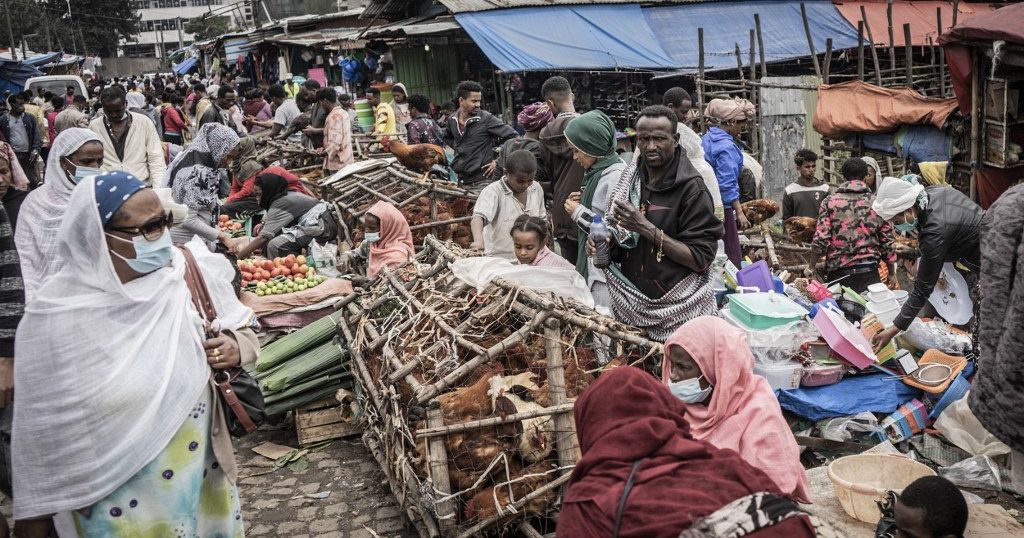 Tesfaye Hagos usually rings in the Ethiopian New Year by buying embroidered cotton dresses for his wife and young daughters, slaughtering a goat and inviting friends around for a feast. But not this time.

With war raging in the country’s north and ethnic Tigrayans like himself fearing arbitrary arrest, Tesfaye plans to keep his head down during Saturday’s holiday.

“The new year is coming, but it’s far from my mind,” he told AFP. “I’m just going to stay at home and pray for peace.”

Africa’s second most populous country adheres to a unique 13-month calendar that begins in September and runs seven to eight years behind the Gregorian version. Saturday will mark the first day of 2014 for Ethiopians.

The celebrations are usually merry, with families singing and dancing as small children gather bouquets of the bright yellow daisies that bloom every year.

But this year’s festivities have been dampened by the conflict — particularly for ethnic Tigrayans — and related economic woes, notably inflation that exceeded 30 percent last month for food.

Prime Minister Abiy Ahmed is trying to rally the country, with a five-day social media campaign in the run-up to the holiday highlighting such themes as heroism and victory.

But for Tigrayans like Tesfaye, the life they knew was upended in November, when the acrimonious relationship between Abiy and the Tigray People’s Liberation Front, the regional rulers of Tigray, erupted in violence.

Many thousands have lost their lives in a conflict marked by brutal massacres and mass rapes, and some 400,000 people face famine-like conditions, with a “de-facto aid blockade” choking humanitarian access, according to the UN.

In the capital Addis Ababa, meanwhile, Tesfaye has been fired from his job at a government office after more than a decade of service, with a dismissal letter accusing him of giving money to the TPLF.

He now says he avoids speaking in the Tigrinya language and has deleted Tigrinya songs from his phone in a bid to evade a campaign of mass arrests that rights groups say has swept up hundreds of Tigrayans — and possibly many more — in recent weeks.

Authorities have suspended more than 80,000 “TPLF-supporting” businesses and revoked the licenses of more than 500, an advisor for the trade ministry told state media this week.

The government denies engaging in an ethnically-motivated crackdown, saying it is merely targeting suspected backers of the TPLF, which lawmakers have officially designated a terrorist group.

But that brings little comfort to Tigrayans alarmed by government-organised rallies denouncing the TPLF as “Ethiopia’s cancer”, including one on Monday at which attendees called for the so-called junta’s “destruction”.

Two days later, Ethiopian flag vendor Shafi Mame echoed those views while sitting at his stall in the capital’s open-air Mercato market, where a smattering of shoppers bought meat and spices for holiday meals.

“We will start the new year with new hope… we will drive away and bury the junta,” he said.

“We wish for the new year to bring prosperity and a new life without them.”

But elsewhere in the market, vendors and customers fretted less over battlefield gains and more over the soaring costs of basic items like butter, oil and coffee.

“The holiday is here, but as you can see, there are no customers,” said Mudin Ramatu, gesturing at the near-empty stall where he sells grains and spices.

“Currently, the prices of the goods have increased, and people cannot afford to buy.”

Although Ethiopia’s inflation woes predate the conflict, they have been exacerbated by it.

As she hunted for spices, Tsedey Yimer said she believed the cost of living would go down only once peace was restored.

“The Ethiopian people are worried and anxious, and we are fasting and praying. May God give us a year that brings love and peace,” she said.

Yet a months-long diplomatic push for talks has made little headway, and it is unclear whether either side will make peace a priority in the immediate term.

In his New Year message, TPLF leader Debretsion Gebremichael warned supporters of “a difficult journey” ahead, but said victory was “inevitable”.

“We shouldn’t sleep until our enemies are destroyed,” he said.