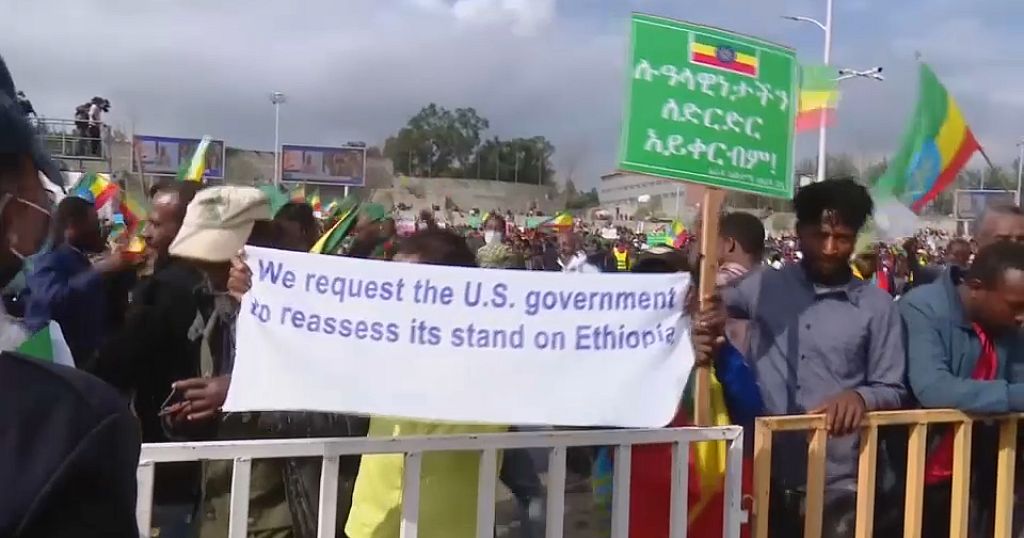 Thousands of pro-government supporters in Ethiopia gathered in the capital Addis Ababa on Sunday to denounce rebels in the country’s Tigray region.

They rallied in Meskel Square in protest at what they see as foreign interference in Ethiopia’s affairs.

The government has come in for strong international criticism over the conflict in Tigray, which broke out last November.

One banner at the rally called on the United States to reconsider its stance towards Ethiopia.

The deputy mayor of Addis Ababa, Adanech Abebe, told protesters that the government had been chosen by the Ethiopian people.

No one could force a puppet goverment on Ethiopia, he said.

The Tigray war has killed thousands of people and pushed the area to the brink of famine. More than 60,000 people have also fled Tigray and taken refuge in Sudan.

Ethiopia declared the cease-fire in late June during a stunning turn in the war, as its military retreated from Tigray and the resurgent Tigray forces retook key towns and walked into the regional capital, Mekele, to cheers.

While the United Nations and United States raise the alarm about the Ethiopian government’s continuing near-complete blockade of the Tigray region and its 6 million people, the Tigray forces have vowed to secure the region and pursue its “enemies.” They have said the prime minister needs to go as one of several preconditions for talks.

The conflict erupted in November after a falling-out between Prime Minister Abiy Ahmed and the Tigray ruling party that had dominated Ethiopia’s government for nearly three decades. Since then, thousands of people have been killed.