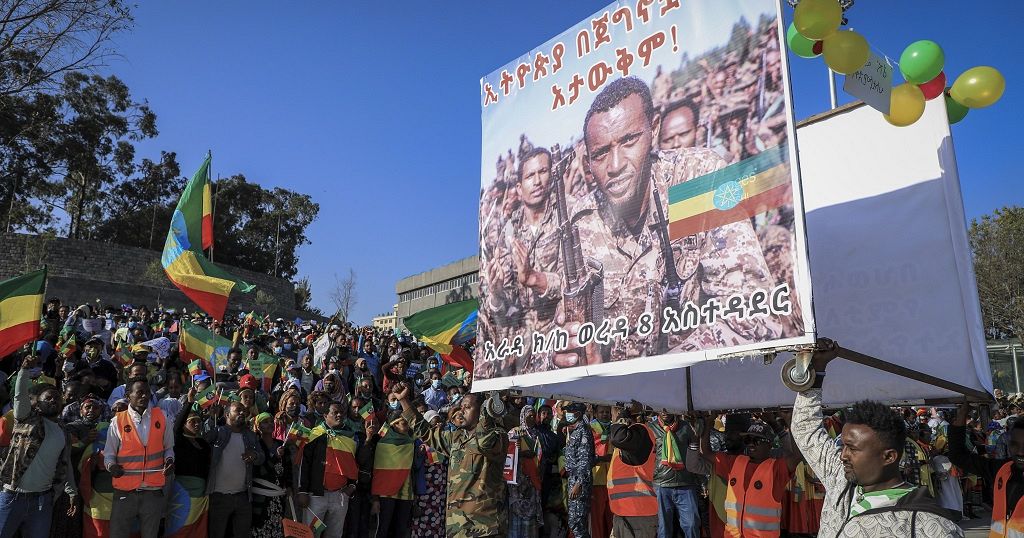 Tens of thousands of Ethiopians vowed to defend the capital from advancing rebels during a pro-military rally on Sunday where attendees dismissed diplomatic efforts to end the year-long war.

The rally in central Addis Ababa was the latest attempt to shore up public support for the conflict against the Tigray People’s Liberation Front (TPLF) and allied groups.

It came five days after the government declared a nationwide state of emergency ostensibly to protect civilians from the TPLF, which has claimed key gains in recent days while floating a possible march on the capital.

US official Jeffrey Feltman arrived in Ethiopia on Thursday to try to broker an end to the hostilities.

The US embassy announced on Saturday it was ordering the departure of non-emergency staff, days after countries including Saudi Arabia, Norway, Sweden and Denmark urged their citizens to leave.

Other signs urged the US, one of the harshest international critics of the war, to “stop sucking our blood”.

Addis Ababa mayor Adanech Abebe said in a speech that Ethiopia’s foes were trying to “terrorise our population”.

She was particularly critical of the US government, which last week announced plans to boot Ethiopia out of a vital trade pact because of rights abuses related to the war.

She also said the TPLF’s rightful place “is in hell”.

Guns ‘not the solution’

Prime Minister Abiy Ahmed sent troops into Tigray last November in response to a TPLF attack on federal troops based in the state.

In June, the rebels rejected a government ceasefire and attacked the neighboring regions of Afar and Amhara.

Several Addis Ababa residents said on Sunday they did not fear the TPLF.

“They won’t come to Addis because I believe the military can destroy them,” said clothing vendor Kebede Hailu.

“There will be no negotiation. They are terrorists and they should be buried and destroyed.”

Yet one performer, singer Tariku Gankisi, appeared to go off message when he took the stage and called for talks.

“Why are we saying move forward and die? Let the youth stay, let the elderly go (to the front). It’s better to have negotiations,” he said.