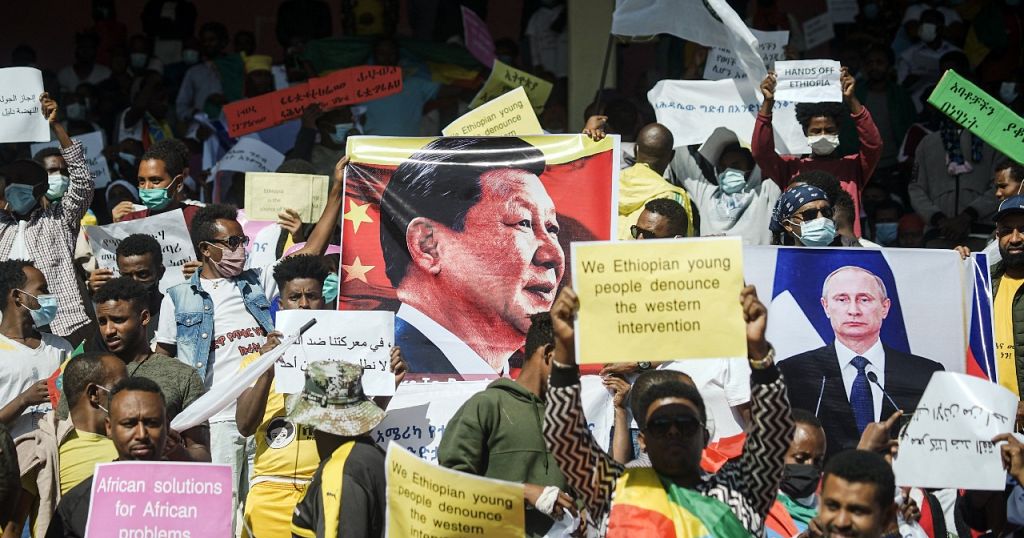 More than 10,000 people in Ethiopia are taking part in an anti-US rally in the capital Addis Abbaba, denouncing President Joe Biden’s policy on the conflict in the country’s northern region of Tigray.

Biden this week called for a ceasefire in the conflict, which is now in its seventh month, and imposed restrictions on visas and economic assistance. But protesters say they are meddling.

People also showed their support for Russia and China.

“I came out today to oppose the idea of foreign countries trying to interfere in our domestic affairs and babysit us. We are a sovereign country,” said demonstrator Abera Tesfaye.

“As a sovereign country, our people and our government decide for our country.”

The rally, and smaller ones elsewhere in Ethiopia, was organised by the Ministry of Women, Children and Youth under the banner “Our voice for freedom and sovereignty”.

Ministry officials had earlier predicted that more than one million would attend nationwide, with 100,000 at Addis Ababa alone. No turnout figures were immediately available.

“America and its associates, without understanding the ways of the TPLF forces ways and disastrous acts, they are interfering in our domestic affairs by imposing travel sanctions and prerequisites which can by no means be accepted,” said Mayor of Addis Ababa Adanech Abebe.

“They should stop and think thoughtfully about this issue to correct it.”

What is the situation in Tigray?

Though he vowed the conflict would be brief, fighting continues more than six months later, and world leaders are warning of a potential humanitarian catastrophe in the northern region.

Eritrean troops, who teamed up with the Ethiopian military, have been implicated in multiple massacres and other atrocities during the Tigray conflict, allegations that Asmara denies.

Both the TPLF and the Eritrean forces have been accused by human rights groups of committing crimes against civilians, including mass killings and rape.

Biden, among other world leaders, has demanded Eritrean forces withdraw and rights abuses end, as aid groups push for greater access to the region.

Demonstrators at the Addis Ababa rally also waved banners in support of the Grand Ethiopian Renaissance Dam (GERD), calling for the mega-project on the Blue Nile to be filled.

The GERD is a source of national pride for many Ethiopians but fiercely opposed by Egypt and Sudan, who fear their own water supplies downstream will be affected.

Ethiopia has said it will push ahead with a second phase of filling in July and August, even if no agreement has been reached with Sudan and Egypt.

“Ethiopia, my country, will proceed forward and won’t go back. America should take its hands-off us,” said protester Tirngo Negash.

“Egypt should refrain from the Nile dam. to show them that we Ethiopians will continue as a nation.”