Skip to content
A. Doris Ehujuo 1 year ago 4 min read 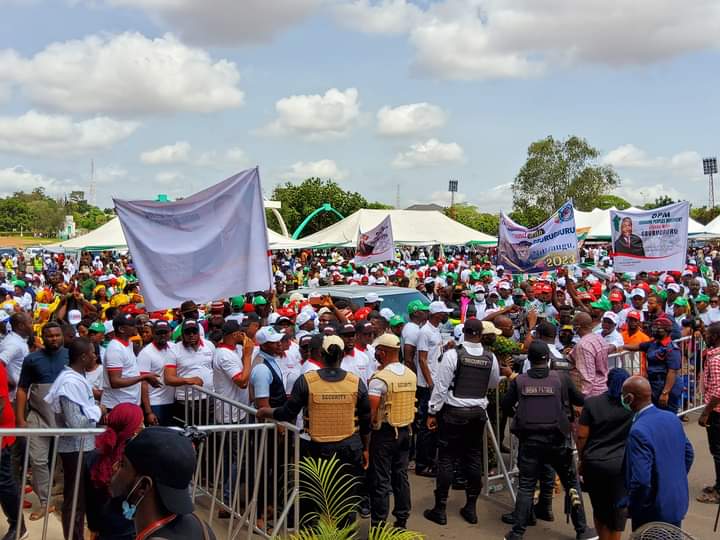 People of Enugu East Senatorial Zone of Enugu State, Thursday, sounded note of warning against any plan to truncate the zoning arrangement with regards to the governorship position in the State.

They made the declaration at a mega rally held at the Michael Okpara Square in Enugu, the State capital.

Governor Ifeanyi Ugwuanyi of Enugu State was the Chief guest of honour at the rally.

The Governor, in his speech, said he was delighted to be in the midst of the people of Enugu East, adding that he appreciates their support in the 2019 election.

Respect zoning arrangements – Enugu West APC to members
He assured them that their support would never be taken for granted.

Ugwuanyi said he had listened to their speeches and assured them that as 2019 election ended in praise, 2023 shall also end in praise.

He also assured them that justice shall prevail.

DAILY POST reports that in the build up to the 2023 general election, there has been claims and counter claims with regards to the zone that would produce the next Governor of the State.

Stakeholders of Enugu West Senatorial Zone, home of former Deputy Senate President, Chief Ike Ekweremadu came up few days ago vowing to produce the next Governor of the State.

Some politicians from Enugu North have also made a case for the zone, arguing that since the position has gone round, the rotation should start from them.

But the people of Enugu East have now vowed that no one would stand on their way to the Lion Building in 2023.

The Okpara Square event had in attendance people from various political and religious divides, traditional rulers, among others.

First to speak was the convener of the rally and Speaker of the Enugu State House of Assembly, Rt. Hon. Edward Ubosi, who warned that “we have blood of a butcher in us, we can do undo.”

Ubosi who was the first to speak told Governor Ugwuanyi that his predecessors all anointed those that succeeded them, stressing “Your Excellency, your own will not be different.

“Your Excellency, your own is not going to be different, we are waiting for you to anoint the next Governor of Enugu State from Nkanuland, which compromises six local government areas. Any soul you pick, we will give you and the person all the needed support.”

The Speaker went ahead to knock those he said have been going around with the notion that Nkanu people were butchers.

He stressed that they were indeed proud to be butchers, adding “I agree we are butchers. If not for the insecurity in this country we were supposed to come here with our matchets. How can you call us butchers? A zone that produced the first governor of the old Anambra State, you are calling us butchers.”

Ubosi enumerated other principal leadership positions that the people from the zone had occupied and warned against any further denigration of the people.

“How can a reasonable person be calling us butchers? An Nkanu man can have anything, with that blood of a butcher in him he can do undo. I want to call on other zones not to undermine us.”

Meanwhile, Chairman of the All Progressives Congress, APC, in Enugu State, Dr. Ben Nwoye told the gathering that the party has already zoned its governorship ticket to the Enugu East Senatorial Zone.

Nwoye, who lauded Governor Ugwuanyi for the existing peace in the State said the zoning arrangement should not be destroyed.

“APC has already zoned its governorship ticket to Enugu East,” he said amid applause, adding “we are here to tell the PDP to also zone the position to Enugu East.”

On his part, however, Chairman of the Peoples Democratic Party, PDP, in Enugu State, Hon. Augustine Nnamani said his party was yet to cede the position to any of the three Senatorial zones.

Hon. Prince Offor Chukwuegbo, representing Enugu-North/South Federal constituency, who spoke on behalf of members of the National Assembly lauded Governor Ugwuanyi for identifying with them and for the prevailing peace in the State.

He said the essence of the event was to solicit the support for the emergence of a Governor of Enugu East extraction in 2023.