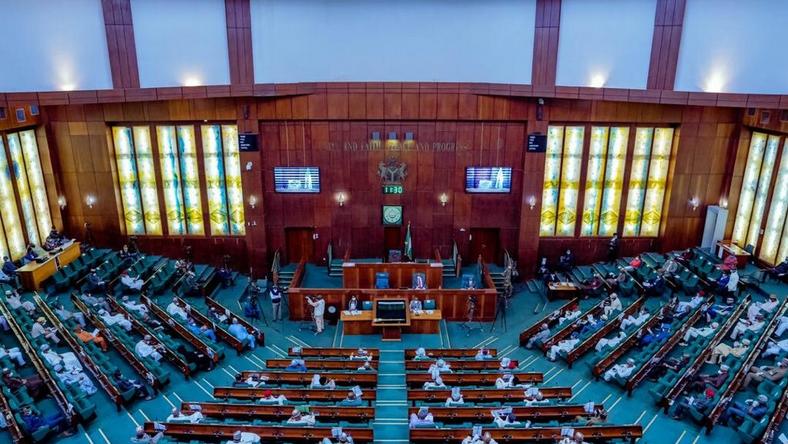 The bill is to regulate the Federal, States and Area Councils Elections and other related matters.

The bill which sought to reform electoral processes in the country, was sponsored by Rep. Aishatu Dukku (APC-Gombe).

Leading the debate, Dukku said that the bill sought to make provisions for restriction and qualification for elective office to relevant provisions of the Constitution of the Federal Republic of Nigeria, 1999.

She said that it sought to give legal backing to the use of card readers and other technological devices during general elections and party primaries.

The Rep said that the bill when passed into law, would provide a timeline for the submission of lists of candidates and criteria for substitution of candidates.

According to her, it will address limit of campaign expenses, and address the omission of names of candidates or logo of political parties.

“This amendment has become necessary because of the flaws observed in our electoral system.

“It’s no longer news that our electoral experiences since 1999 show a strong correlation between an efficient and effective electoral legal framework and the conduct of free, fair and credible elections.

“In fact, amendments of our electoral laws were long identified as priority legislation by the National Assembly because of the need to consolidate on the gains of our democratic achievements and to also address the lacuna identified in the electoral legal framework.

“A typical example is the case of the Kogi Governorship election in 2016, where a leading candidate died after the commencement of polls but before the declaration of results.

“In addition to this are concerns that the legal framework on certain issues should be well settled ahead of the 2023 elections such as the use of technological devices like the card reader and electronic voting system.

“Also, criteria for substitution of candidates, disclosure of source of funds contributed to political parties, replacement of lost or destroyed permanent voters card, penalty for the possession of fake voters’ card, dates for conducting primary elections shall not be earlier than 150 days and not later than 120 days before the date of election, etc.

“The bill, therefore, seeks to address many loopholes in our electoral system by way of amending over 300 clauses (including new provisions) of the Electoral Act 2010,” she said.

Dukku said that Section 3(2) (a) of the existing Act provided definite timeline for the release of funds to INEC for the discharge of its statutory duties.

According to her, the amendment is an insertion which states that the funds for General Elections shall be released to the Commission not later than 180 days to the date appointed for the elections.

Dukku said that the bill stated that when an election had began and there was substantial evidence of disruption in a polling unit or threat to peace and security, INEC should suspend the election and appoint another date for the continuation of the election.

She said Section 30 which provides for notice of election was amended to state that “substitution of candidates in a by-election except where a candidate of a political party in a by-election dies, the party shall submit to the INEC the name of its substitute candidate within 48 hours of the death of the candidate in the form prescribed by the commission.

“Section 36 (1) under death of a candidate is amended as follows: if after the time for the delivery of nomination paper and before the commencement of the poll, a nominated candidate dies, the Chief National Electoral Commissioner shall, being satisfied of the fact of the death, countermand the poll in which the deceased candidate was to participate and the commission shall appoint some other convenient date for the election within 14 days.

“And a new subsection (3) is provided, thus: if after the commencement of polls and before the announcement of the final result and declaration of a winner, a candidate dies, the commission shall, being satisfied of the fact of the death, suspend the election for a period not exceeding 21 days.

“The political party whose candidate died may, if it intends to continue to participate in the election, conduct a fresh primary within 14 days of the death of its candidate and submit the name of a new candidate to the commission to replace the dead candidate,” she added.

The Minority Leader of the House, Rep. Ndudi Elumelu (PDP-Delta), said that the amount of money required to pick a form and contest election should be reduced to make room for the common man to participate.

He said that the house should not allow money to exclude egg heads who could contribute to national development but does not have funds.

The Rep said that when people spent so much to win elections, they would be more concerned about how to regain the amount spent than good governance.

Rep. Babajimi Benson (APC-Lagos) drew the attention of the house to a section that said where number or votes cast exceeded accredited voters, elections might be cancelled and rescheduled for another date.

He said that the word “may” should be replaced with the word “shall” to ensure that nobody was disenfranchised under any guise.

Also, Rep. Jide Jimoh (APC-Lagos) said that the section which said INEC “may” use any electronic device in the conduct of elections should read “shall” to ensure uniformity and prevent court actions.

In his ruling, the Speaker of the House, Rep. Femi Gbajabiamila, referred the bill to the Committee on INEC and Political Party Matters for further legislative actions.