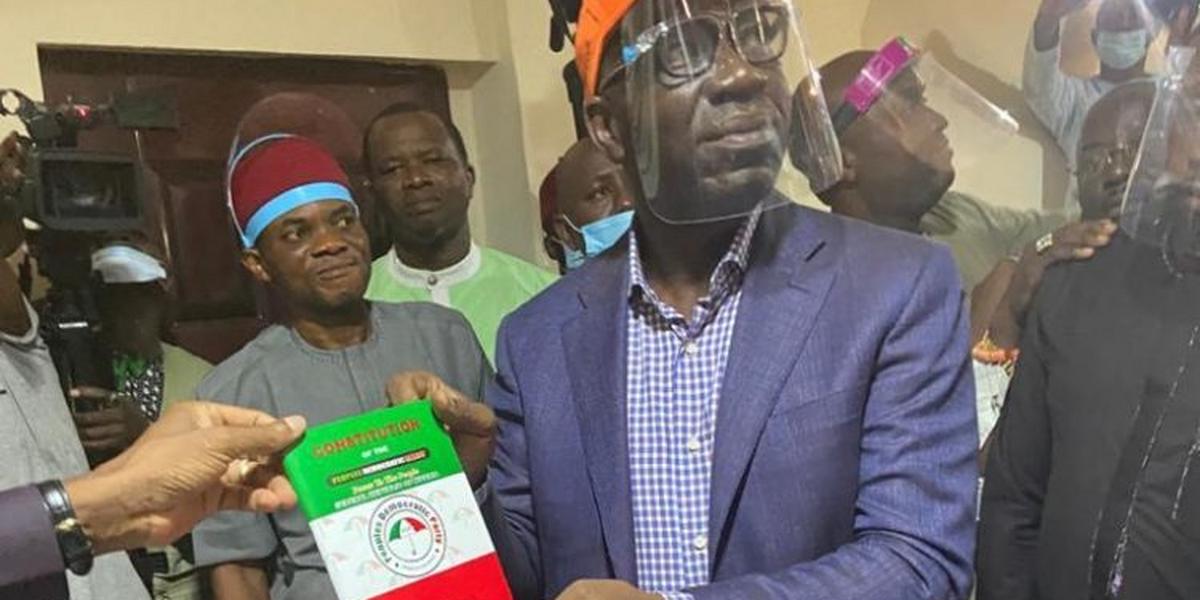 Following the proposal, the state party chairman, Dr Tony Aziegbemi, and state party Secretary, Mr Hillary Otsu, wrote a letter on behalf of the elected officials to the National body of the party.

In the letter, which was made available to NAN, the expanded state working committee of the party rejected the proposal by Obaseki to dissolve “a legitimately elected executive”.

The letter reads in part: “The expanded State Working Committee and Local Government chairmen of the Edo State PDP reject in its entirety, the proposal by the above mentioned meeting to dissolve the legitimately elected executive committee members of the PDP at the Ward, Local Government and State levels.

“We also condemn totally, the convening of such a meeting aimed at ambushing our State Chairman, who is constitutionally empowered to call such a meeting.’’

The party executives noted that only three old PDP members: Dr Raymond Dokpesi, Chief Tom Ikimi and Chief Mike Oghiadomhe, were in attendance as against 10 members from the Obaseki’s team that decamped from the APC to PDP.

“We hereby reiterate to the National Executive Committee of our party that the issue of dissolution of executive committees in Edo State is subjudice and it will be an act of contempt of court to revisit it by the party.

“The genesis of this looming crisis results from the acquiescence of the National Working Committee members who negotiated Obaseki’s movement to the PDP.

“(The committee did not) reach a verbal or written agreement on the integration of the new members, vis a vis, the sharing of appointments, after the elections had been won.

“We, therefore, condemn Gov. Obaseki for re-appointing his former Secretary to the State Government (SSG) without any consideration for the `legacy PDP’ he joined.

“To this end, they have consistently sang a tune of “harmonisation” ever since Obaseki was sworn in, now that he has the “yam and the knife”.

“We have resolved strongly, that if any harmonisation must take place, it must start from the Governor’s office, where his Deputy Governor should resign and a deputy nominated from the old PDP is sworn in.

“This can be a springboard for broad harmonisation across the state party organs.

“The proposed dissolution and, or, harmonisation are designed to hold Edo people and the PDP to ransom by the Obaseki-led administration. We will not accept this.

“Edo people voted for PDP and Godwin Obaseki to deliver the dividends of democracy to them.

“But if Gov. Obaseki wills to conduct governance by a triumvirate of the Governor, the deputy governor and the SSG, so be it.

“If he wishes to appoint only his friends and former APC colleagues in his cabinet and sundry positions and leave out the legacy PDP members, so be it.

“We, the state PDP leadership will not accede to any form of harmonisation that has no backing or interpretation in our party constitution.”

The state party leadership further noted that the governor was being misguided and misled by three alleged groups.

The groups, the party leadership said, were those with aspiration for 2023 and 2024 elections, those who lost during the last state Congress, and the godfathers who joined the party from the opposition.

“We recognise that the Governor is being misguided and misled by three groups of individuals who are bent on bringing our party to disrepute.

“Group A includes aspirants for 2023 and 2024 elections, who are both rumoured to have governorship and Senatorial aspirations.

“This (aspiration) is legitimate. However, such ambitions will not be used to rubbish the integrity of the party.

“The other group is the congress losers. These members have never hidden their disdain for the new executives across the state, simply because they backed the wrong “horses” and lost woefully at various congresses.

“The last group is the godfathers from the opposition. These individuals have brought the extinct opposition culture of godfatherism, where they usually sat and wrote names for Gov. Obaseki to install as chairmen, councilors etc.

“They have refused to register in their wards as PDP members while continuously attending PDP meetings under the governor’s auspices, with impunity.”

The party leadership, therefore, said that it would not be cowed into any illegality by the state government.

“PDP in Edo will not be cowed into any illegalities by the state government.

“We have consistently bent over backwards, to a breaking point, in our efforts to integrate Gov. Obaseki’s former APC supporters.

“How did we do this?

“At the Zonal congress held in Port Harcourt recently, the two positions zoned to state (Financial Secretary and Ex-Officio member), were conceded to the Governor without any deliberation by the party hierarchy.

“The National Ex-officio position was also conceded to the governor without any deliberations.

“Mr Chairman, how far do we have to go to show good faith? Let it be known that we will not concede any more positions, and those already nominated will be recalled and re-allocated.

“The Binis say that the woman whose child is an albino, but gladly answers the call of ‘Mama oyinbo’, is only living in self-deceit.

“Mr Chairman, we cannot live in self-deceit,’’ the letter concluded.