In a video that has since gone viral, a pastor appealed to the singer to be careful around his associates, especially the people living in his house.

According to the pastor, Davido was poisoned by someone in the house and rushed to the hospital.

“Did he die? No, but something was removed from him,” the pastor said.

Hours after the video went viral, the father of three took to his Twitter page where he tweeted about God exposing the evil people around him. 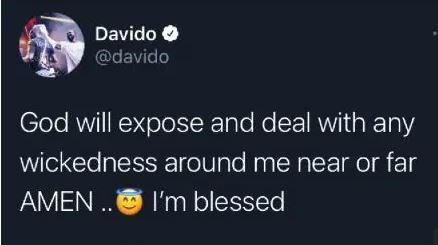 “God will expose and deal with any wickedness around me near and far. Amen…I’m blessed,” he tweeted.