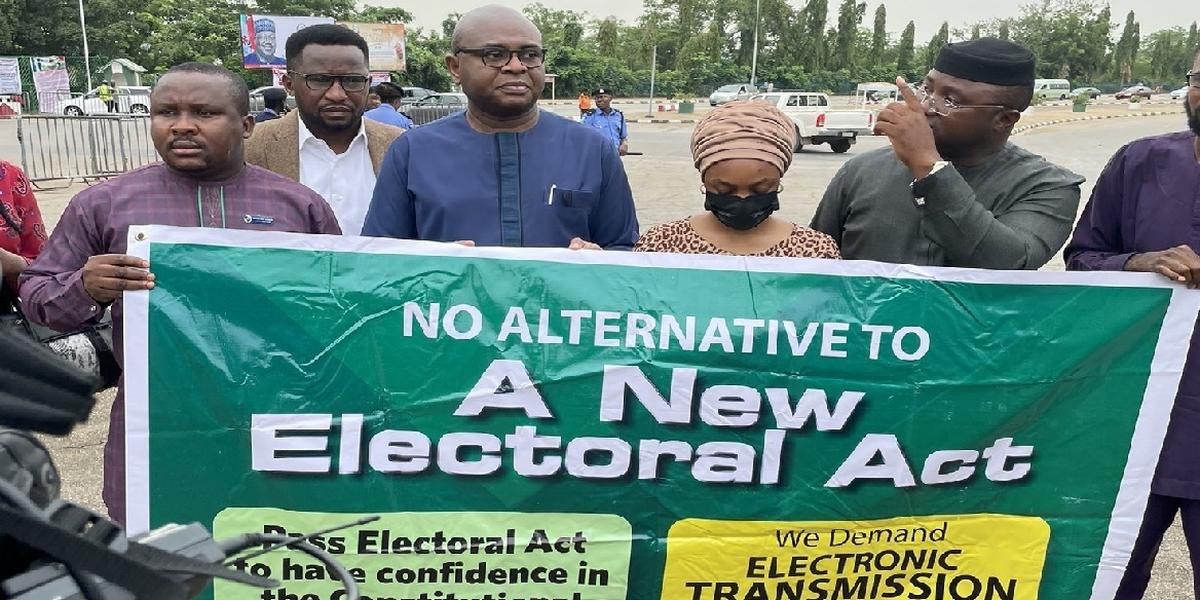 The Co-Convener of the Centre For Liberty, Mr Ariyo-Dare Atoye, who spoke on behalf of the nine organisations, said Nigerians were eager for an amended electoral reform.

“We are waiting for new electoral act that will improve the country’s electoral system and tested in off-cycle elections ahead of the 2023 general elections,” he said.

Atoye said the undersigned CSOs were highly concerned that the 9th National Assembly has not passed the Electoral Act (Amendment) 2021 Bill in spite various appeals, rallies and protests from the Nigerian people in support of the piece of legislation.

“The National Assembly must agree that elections remain the most critical aspect of democracy the world over.

“It has become inevitable that we must address the deficits in the electoral system to entrench enduring electoral reforms and strengthen the capacity of the Independent National Electoral Commission (INEC) to conduct free, fair, credible and transparent elections and guarantee electoral integrity.

“Electoral Reforms now represent a major Citizens Charter of Demand to the National Assembly for good governance and charismatic leadership.

“Eleven years after the Electoral Act 2010 was passed with subsequent amendments, Nigerians are eager to have Electoral Act 2021 (Repeal and Re-enactment) that will be tested and perfected in off-cycle elections before 2023.”

Atoye said that Citizens’ participation in the electoral process was necessary for democratic sustenance.

“Thus, this statistics should be a source of concern to representatives of the people and direct beneficiary of the electoral system like your humble self.

“More importantly, at this time, the unity of the Nigerian state is seriously challenged by separatists and secessionists drive due to injustice, poor governance, and made worse by bad leadership; Nigeria cannot afford another flawed general election.

“That is why the countdown to 2023 and other off-cycle polls, has required a greater certainty about the electoral legal framework for achieving a more credible and improved electoral process.”

Atoye said that there was no better legacy for the 9th NASS than to give Nigerians a new Act before it embarks on its annual long recess.

“With the modest effort already made by the 8th Assembly on Electoral Reforms, in which the current principal officers were major actors, the people believe that Electoral Act 2021 ought to be a ‘walk in the park’ for the 9th National Assembly.

“In this vein, it is our hope that the 9th National Assembly, under your joint watch, will write its name in gold by passing the Electoral Act (Amendment) 2021 Bill and transmitting same to President Muhammadu Buhari for his assent as the president while receiving the leadership of INEC recently, expressed his willingness to sign the bill when it is passed by the National Assembly.”

Atoye said that an early passage of the bill by the National Assembly would prevent any excuse from the Executive and also ensure that INEC prepares adequately before future elections, especially the 2023 polls.

“In conclusion, the passage of the said bill will further reawaken the hope of Nigerians who have already given up on the system and put Nigeria on the map of countries committed to a transparent electoral system.”

The group includes the Electoral Hub, Speak Out Africa Initiative, To Build a Nation, and Centre for Development Alternatives Research and Studies

Others are Raising New Voices, Ready To Lead Africa, Center for Impact Advocacy, and Aspilos Foundation.