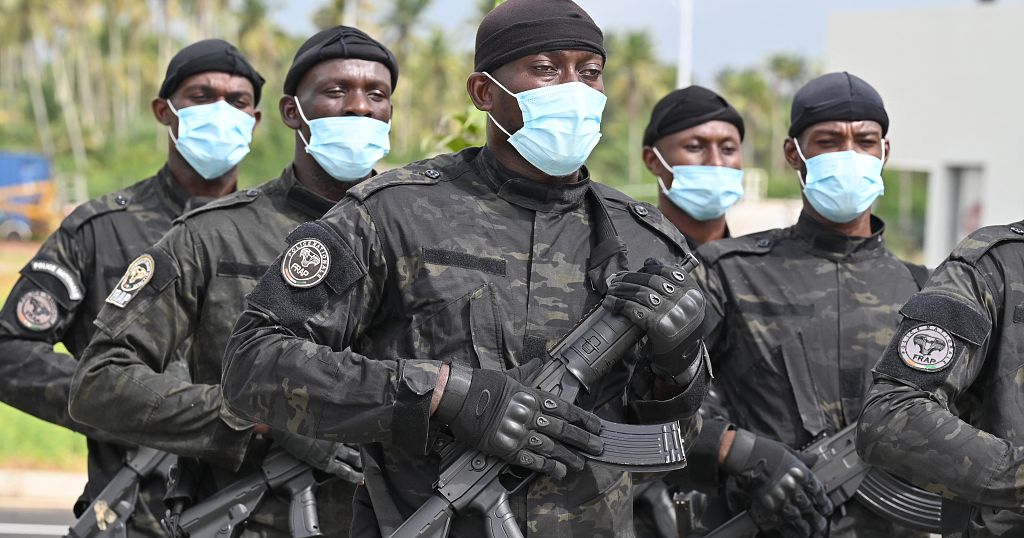 The aim of this establishment is to train cadres and special forces from the African continent in a move to reinforce the resistance efforts against jihadist extremists in the region.

These terrorist groups have steadily intensified their violent attacks in the Sahel and gradually expanding nearby areas.

“This site covers 1,100 hectares with a development project of about 15 billion CFA francs. These developments make it possible to accommodate a management facility, to provide 3 training courses for 25 trainees simultaneously, to house 25 trainees and feed 80, to train units in the fields of counter-terrorism in urban and rural areas, shooting and close protection.”

“We know that our responsibility is to fight together against this common enemy whose abuses in the Sahel concern us directly because on the threat map, the Sahel is the southern border of Europe and the northern border of the Gulf of Guinea states.

“All actors in the region must now fully appropriate this exceptional tool while intensifying their joint commitment against the groups that threaten them. This must be done in the wake of the Accra initiative and ECOWAS’ 2020-2024 action plan, all in order to eradicate terrorism.”

Fighting in the vast semi-arid region began in 2012, when Islamist militants joined a local insurgency in northern Mali, capturing swathes of territory.

France intervened in January 2013 to beat them back, in an operation called Serval.

Serval was succeeded on August 1, 2014, by the broader Barkhane mission, which currently has some 5,100 soldiers deployed across the Sahel.

After being routed in northern Mali, Islamist militants regrouped to spill into the centre of the country, where they inflamed ethnic tensions, and then into neighbouring Burkina Faso and Niger.

Thousands of soldiers and civilians have died and more than two million people have been displaced, adding to the woes of an already impoverished region.

Last weekend, at least 138 men, women and children were killed in northern Burkina Faso in one of the worst civilian massacres since the outbreak of the Sahel conflict. Local sources cite a death toll of about 160 people.

Such mass killings are far from isolated. In January, militants linked to the Islamic State group slaughtered 105 people in two villages in western Niger.

Mali, Niger and Burkina Faso are among the poorest nations in the world, and government authority in many rural areas is often in name only.

Jihadists have benefitted from a sense of abandonment among rural populations and exploit pre-existing tensions between ethnic groups.

The Armed Conflict Location and Event Data (ACLED) Project, an NGO that records statistics on political violence, said 2,248 civilians were killed in the central Sahel in 2020 — 400 more than the previous year.

The UN said in January that more than two million people have now been displaced.

Civilian self-defence groups have sprung up alongside jihadist outfits across the region.

Some of these groups are small and local.

But others, such as Burkina Faso’s Volunteers for the Defence of the Homeland, are large auxiliary organisations for the conventional armed forces.

In central Mali, an ethnic Dogon militia named Dan Nan Ambassagou controls swathes of territory, with officials in the capital Bamako fearing the group is rivalling the army.

These two organisations fill a “glaring state vacuum,” said a UN official in Mali, speaking on the condition of anonymity.

Sahel armies are no longer suffering the huge casualties of a few years ago, and the French government believes they are becoming more self-reliant despite persistent weakness.

But on the political front, crises are common.

Chad’s veteran leader Idriss Deby Itno was killed on the frontline against rebels in April.

And in Mali, the army launched a coup against the civilian leaders of a transitional government last month.

That coup followed a putsch last August when the military ousted president Ibrahim Boubacar Keita after weeks of anti-government protests.

“The security crisis is simply the symptom of a deeper crisis of state governance,” said Jezequel.

Huge tracts of Mali also lie outside of government control: Only 9% of civil-servant positions in the north and centre of the country are filled.

Before announcing Macron’s announcement on Thursday, France had already suspended military cooperation with Malian forces in response to the latest coup.

Fears have grown that the insurgency could swing south, destabilising countries on the Gulf of Guinea.

French intelligence has released footage of a meeting between Al-Qaeda commanders in the Sahel where they mention plans to expand towards the coast.

Ivory Coast has suffered four jihadist-linked attacks this year, the latest of which occurred on Monday on the border with Burkina Faso when a soldier died of wounds.

In June last year, jihadists killed 14 soldiers in an attack on a frontier post.

A Dutch security report said on Thursday that jihadists near Benin’s northern borders could meddle in communal conflicts.

The UN Security Council warned in a report in February that Al-Qaeda-aligned militants had “established themselves in Senegal,” on the western fringe of the Sahel.