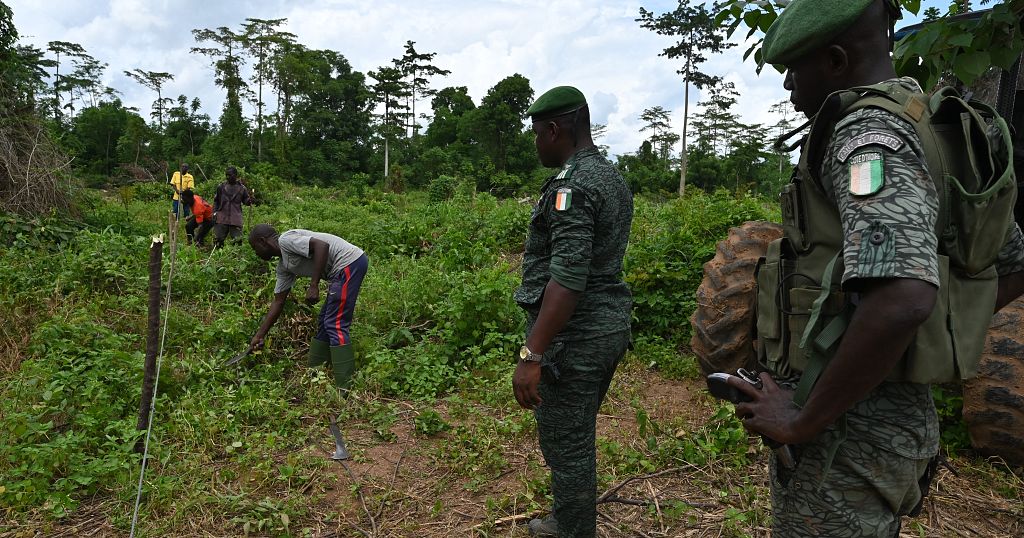 Extensive deforestation to cultivate cocoa in Côte d’Ivoire the world’s leading producer of beans has reduced the surface area of the Ivorian forest from sixteen million hectares — or more than 50% at the time of the country’s independence in 1960, to two million hectares or less than 11% today, according to environmental experts.

Located in the Oumé region, the 30,000 hectare Téné classified forest is home to the largest state-owned cutting centre and reforestation specialist site in the country — the Société de développement des plantations forestières (Sodefor).

“At your orders, Captain,” say Water and Forests agents standing at attention in the Téné forest in central Côte d’Ivoire — as the “war” for reforestation has been declared!

In the lush forest of mahogany and teak trees, the working day begins with a salute to the flag, after which a roadmap is handed over to the Water and Forestry agents in olive-green military fatigues.

Shortly afterwards, dozens of workers, under their supervision, rush to the seed orchard to collect the essential elements for crossing and cutting.

Téné sees nurseries of teak, gmelina, samba, sraké and franiré — wood species destined to be planted on plots that, seen from the air, look like the skin of a zebra, a sign of major destruction, are being designed from the seeds collected.

“The reforestation concerns the entire territory of Côte d’Ivoire. It is from this cutting centre that we raise seedlings for reforestation,” explains Water and Forests Colonel Mathieu Ouléa.

Thierry Koffi Yao, the Captain from the Ministry for Water and Forests, describes the site and its purpose.

“The Téné classified forest is one of the most important reforestation sites in the Ivory Coast. It has been planted mainly with teak, gmelina, sraké, franire and samba. The original purpose of the site was for intensive timber production.”

– Cuttings to save the forest –

To combat the abusive forest exploitation — in addition to millions of reforestation bound cuttings taken from Téné each year, Côte d’Ivoire has adopted a new forestry policy to salvage what is left of the nation’s forests.

The initiative requires about 940 million euros of investment over ten years in a private-public partnership and includes a “tree day” for the past two years.

Mathieu Ouléa, the Colonel from the Ministry of Water and Forests, gives a glimpse into the inner workings of the national forestry mission.

“Every year we carry out reforestation and with the contribution of our partners, the operators, we manage to create large areas.”

In May, the government invited Ivorians to participate in the ambitious reforestation by planting operation “One day, 50 million trees.”

“By 2030 to 2035, Côte d’Ivoire will have no more forests if we don’t fight against the abusive exploitation of our forests,” stated the Ivorian Minister of Water and Forests, Alain Richard Donwahi.

“What is most important is that each of us understands that the government alone cannot do it. Everyone has to be a forest planter, a tree planter. Everyone should participate in reforestation in the Ivory Coast.”

“To make up for the deficit of three million hectares of forest, about three billion trees need to be planted in 10 years,” Donwahi added.

Extensive deforestation in Côte d’Ivoire has also destroyed the natural habitat of endangered wildlife, including the country’s iconic elephants, whose numbers have been halved in 30 years, with less than 500 remaining today.

According to the Minister of Water and Forests, the new forestry policy has provided for “a corridor to allow elephants to move from one place to another and the creation of sanctuaries so that the pachyderms can live protected.”