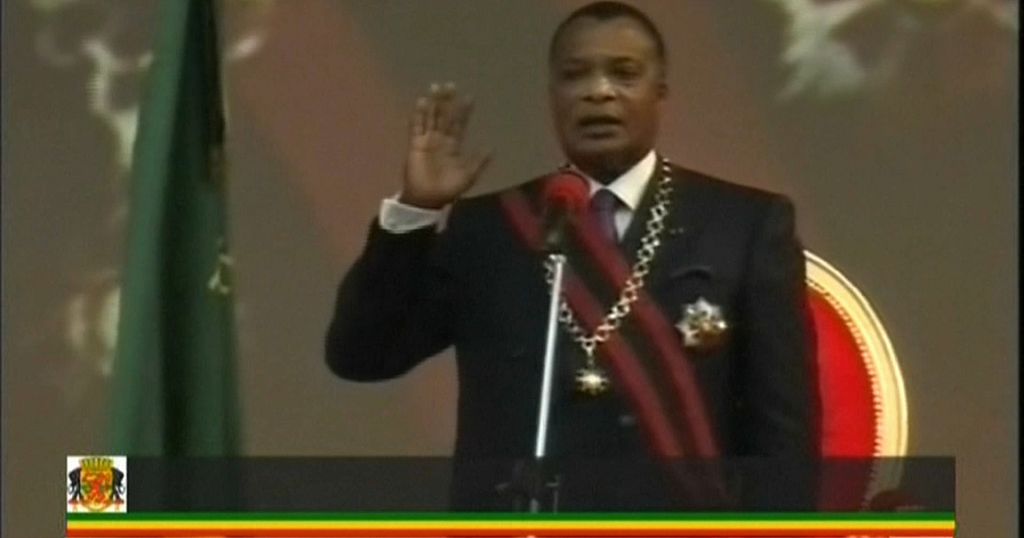 Congo’s President Denis Sassou Nguesso has taken the oath of office for another term, extending his 36-year accumulated rule. The 77-year-old won 88.4 percent of the vote in the March 21 election, boycotted by the main opposition. Sassou Nguesso was sworn in the capital Brazzaville on Friday.

He begins a new five-year term, one with a mighty challenge: to curb its reliance on revenue from oil and to grow more food.

And in a country that has notched up huge debts under his decades-long rule, he also plans to boost industry and revive the country’s decrepit railways.

Congo, a land of five million people that abuts the vast Democratic Republic of Congo, has recently had some good economic news.

Things are looking up in its oil capital Pointe-Noire, with production reaching a record 350,000 barrels per day — even as global oil prices have risen to almost $65 (54 euros) per barrel.

Of this, 448 million euros went to China to pay for Chinese-built infrastructure, EITI said in a report.

Another 340 million went to paying off pre-financing agreements with traders Glencore and Trafigura.

“After we pay back China and the traders, we have 10 percent left (of net oil income) which goes into public coffers to finance the state,” said Brice Mackosso, a veteran activist for transparency in accounts.

In January 2020, the investigative campaign group Global Witness said there were other liabilities of at least $2.7 billion by the state oil company to joint venture partners, including Total, Chevron and Eni.

This meant that the country’s debt level — estimated in 2019 by the International Monetary Fund (IMF) at nearly $9.5 billion when it awarded a bailout of $449 million — could in reality be more than a third higher, it said.

In Nkayi, a town on the RN1 highway between Pointe-Noire and the capital Brazzaville, sugar refining firm SARIS is one of Congo’s rare agricultural success stories.

Its factory sits in hundreds of hectares of sugar cane plantations on the clay plains of the Bouenza region it has cultivated for 50 years.

But in almost every other important agricultural area, Congo has to import to meet its needs.

A new sister enterprise, SGMP, has been built in Pointe-Noire to produce corn in partnership with small maize growers in the region.

“The president is right” to push agriculture, said Joseph, one of the farmers.

“You see how rich the land is. I live well. The children are at school. I even have a garage thanks to farming,” he added.

Julia Gardies, a young agricultural engineer offering farmers guidance on seeds and fertilisers, says SGMP has “more and more requests” from people keen to start out in growing or agribusiness — although “cash flow and the supply of inputs” still drag on expansion.

In industry, new cement factories built for the company of Africa’s richest man, Nigerian billionaire Aliko Dangote, can be seen from the road east towards Brazzaville.

But less than two years ago 375 employees lost their jobs when the Diamond Cement plant built with Indian and Togolese capital went bankrupt in Mindouli, 100 kilometres (60 miles) west of Brazzaville in the southern region of Pool.

Mindouli is also a station on the Congo-Ocean railway which crosses the far south of the country from Pointe-Noire to Brazzaville.

Only freight trains have run since Pool was racked by civil war in 2016-17, and they are stormed by dozens of stowaways.

“I’ve been here for hours. There’s no fixed timetable,” sighed a 51-year-old man, Jeff Alden, who came for medical exams.

He was surrounded by bags of cassava, bananas and safflower that were being hawked in an improvised market on the platform.

“We want change. When he came to power, I was 10 years old,” Alden said of Sassou Nguesso, 77, who has headed authoritarian regimes since 1979 with a brief hiatus early in the 1990s.