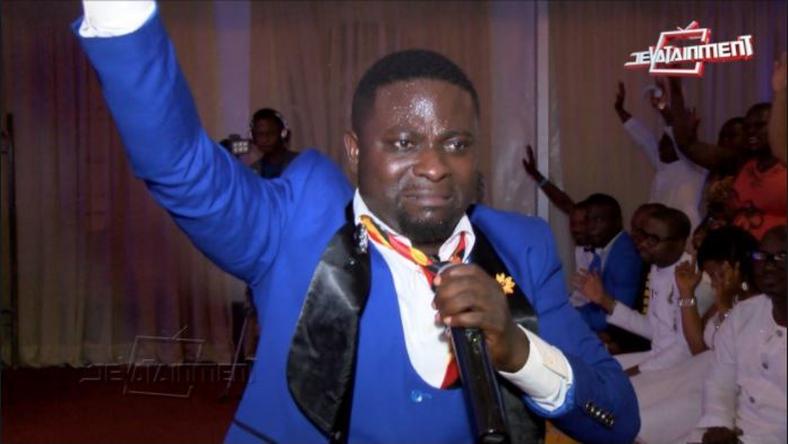 Last night, Joyce Blessing witnessed an embarrassing moment she would never forget during her performance at a Thanksgiving Service in Kumasi.

Joyce Blessing was suddenly interrupted by Cecelia Marfo during her performance. She snatched her microphone and started prophesying that God said Joyce Blessing should go back to her marriage.

The embarrassing moment which was captured on camera has social media talking, and brother Sammy, who has also had similar embarrassing encounter Cecelia Marfo, has something to say.

In a Facebook live video, Brother Sammy claimed once went mad and delivered. He also claimed that Cecelia Marfo is possessed by ‘maame water’ (mermaid) and that she is doing this to disgrace the gospel fraternity.

“Cecelia Marfo has ‘maame water’ spirit and mistaken it for the holy spirit,” he said in a video he shared on his Facebook page today. “She uses spirits from the sea to work so she can be possessed at any time. She sings for the devil. She wants to disgrace the gospel fraternity.”

He continued: “What she did to Joyce Blessing isn’t from God; that not how God delivers. She also spoke fake tongues. She has never called Joyce Blessing since her divorce.”

Brother Sammy dropped a bombshell about the controversial songstress.

“Cecelia Marfo now lives at Adum. She established a church because her career and spiritual powers had ended. Because of greed, she has forcefully taken a man called Mr Bright’s land and his money.”

“She has slept with her driver and two pastors have slept with her. Her church collapsed because she would spit in church members’ mouths and whip them with canes.”

“Cecelia Marfo was once beaten by her husband for committing abortion. I didn’t want to reveal this but if she wants to disgrace the gospel musicians, we will disgrace her too. The doctor who aborted her baby is my friend, and I have the proof. I know the lady who escorted you to commit the abortion,” he threatened.