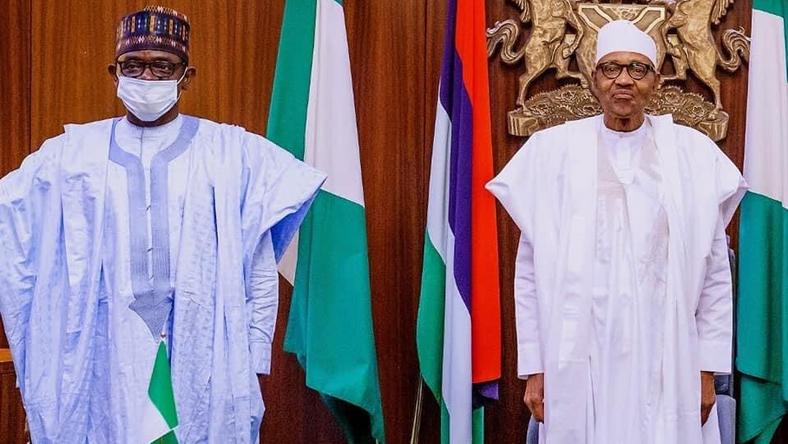 Governor Mai-Mala Buni of Yobe, who is also the APC National Chairman, Caretaker/Extraordinary Convention Planning Committee, made this known at the end of a closed door meeting with the president in Abuja on Tuesday.

Buni was accompanied to the meeting by other members of the caretaker committee including the governors of Kebbi and Jigawa, Atiku Bagudu and Abubakar Badaru, respectively.

He said:, “It’s to consult with him (Buhari) on the process of the membership registration. As from today, we are commencing with sensitisation.

“Thereafter, it will culminate into membership registration across over 119,000 polling units in the country.

“It is part of our mandate as bestowed on us by National Executive Committee to rebuild this party bottom up.

“I have to read the Section of the APC Constitution to you to clearly understand where we are coming from:

“In accordance of section 9.4 of the Constitution of the All Progressives Congress (October 2014 as Amended), the Caretaker and Extraordinary Convention Planning Committee consulted all stakeholders and have organized for membership registration. The said Section 9.4 provide as follows:

“A Register of members shall be compiled and maintained at the Ward Level and be transmitted to the Secretariat of the Party at the Local Government Area, which shall transmit a copy to the State Headquarters, National Secretariat.

“It provides that the Party shall update its membership records every six months and remit updated copies to appropriate Secretariats.

“Thereafter, it shall be the responsibility of a member to ensure that his or her name is duly entered in the Ward Register.”

According to the governor, the committee is continuing the reconciliation efforts and proud of the work done so far.

He said the party had secured Ondo State and facilitated the return of high profile members such as former Speaker of House of Representatives, Yakubu Dogara, and Senator Barnabas Gemade to the party.

On the 14-day ultimatum issued by some aggrieved members of the party for the caretaker committee to step down, Buni dismissed such ultimatum.

He said, “You are all aware, we have three sitting governors in the committee, and you should know that none of the governors is seeking for job. Already, we have a job.

“But we have to sacrifice to ensure that we reposition the party. So, anybody who is thinking that maybe we are job seekers is wrong. We are not job seekers.

“We are here to reposition and reunite our party so that we have a party we can all be proud of. This is our mandate and we are ready to discharge our mandate.

“That (tenure elongation) is left for NEC of the party to decide. It is not me or caretaker committee to decide.

“We are operating within the limit of our assignment because NEC of the party said we must rebuild the party bottom up. So, it is not for us to say that we are extending (tenure).”

Buni, however, expressed optimism that the national executive committee would meet before the end of 2020 to work out a proper timetable for the party.

In his contribution, Governor Atiku Bagudu of Kebbi also dismissed the insinuation that the members of the caretaker committee were bent on extending their tenure.

He noted that the national executive committee that ushered in the caretaker committee did not give a deadline to the committee.

“You may also recall that two days before the caretaker committee was saddled with the responsibility of leading the party, the party lost a serving governor to the opposition.

“So, the chairman (caretaker committee) came at the time when the morale was weak, but the committee worked so hard including the winning of the Ondo State gubernatorial election with the reconciliation of members.

“The national executive committee meeting that ushered in the caretaker committee did not give a definite date.

“We are conscious that these assignments will unfold and intervening circumstances across the country has made it more difficult, but certainly they are not people that are seeking for appointments or seeking to stay,” he said.