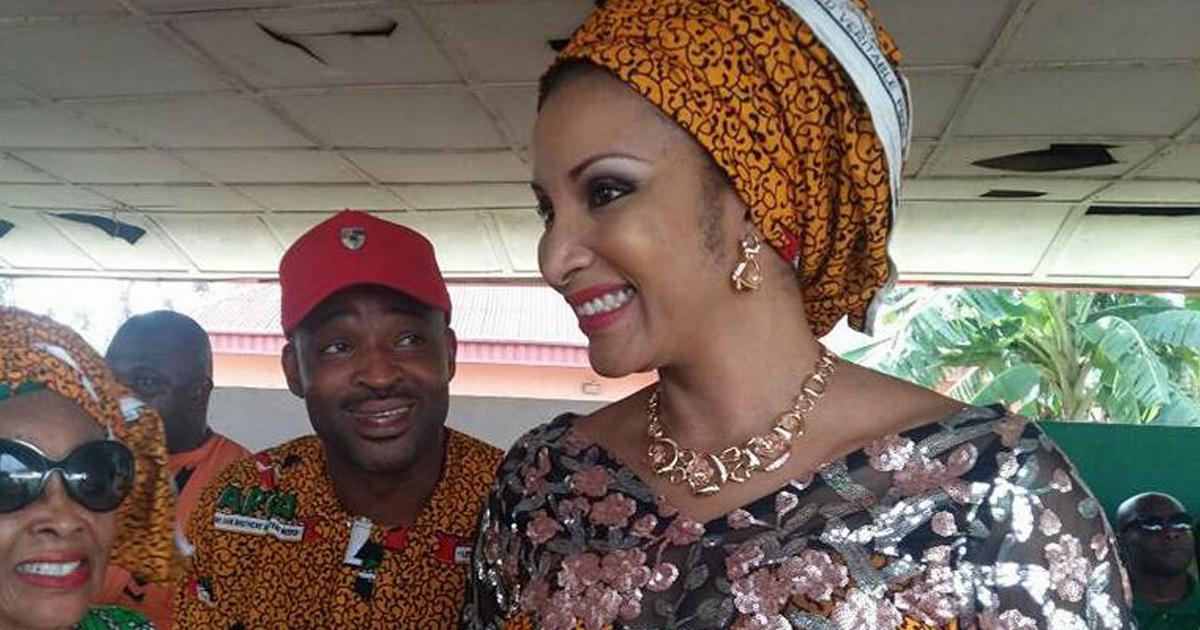 She laid the blame of the “post-mortem disrespect’’ to Dim Chukwuemeka Ojukwu on the doorstep of APGA’s leadership.

Bianca was conspicuously absent at the event unlike previous mega political activities held by APGA, a party that branded late Ojukwu as the spiritual leader of the party.

Another obvious sign which made some political observers note that there was serious crack in the party was the removal of Ojukwu’s image on the customised uniform of APGA worn by people at the event.

Some party faithful, however, wore the old uniform bearing the image of the Eze Igbo Gburugburu, Dim Ojukwu, to the event.

Bianca described as an affront, the treatments to her late husband by the present leadership of APGA.

“It is an irony that today Gov. Willie Obiano has resuscitated Dim Ojukwu’s pictures for use in campaigning for the upcoming elections in Anambra.

“This is the height of opportunism and hypocrisy. Is Ojukwu not the same man Obiano once described as a dead man who was no longer relevant to the party?

“Why should I permit him to keep trampling on the legacy of my late husband who put his heart and soul into this party?

“Ojukwu should not be like a light switch to be turned on for party campaign, and turned off once the election is won,’’ she said.

The former Nigerian ambassador to Spain, expressed displeasure at the decision of APGA’s leadership to expunge her husband’s image from APGA uniform and other insignia of the party.

“It is most unfortunate that Gov. Obiano decided to remove the picture of Ojukwu and replace same with his picture just to drive home his statement that `he would no longer tie the fate and fortunes of APGA to the memory of a dead man’, obviously in reference to my husband,’’ Bianca said.

She listed other ill-treatments meted to her and the deceased husband and maintained that her presence at Saturday’s flag-off would have been an endorsement to the defrauding of scores of aspirants by the party during the party’s primary in the year 2018.

“It is unfortunate that the same APGA election managers that were responsible for the disastrous 2018 party primaries which resulted in severe damage to the party’s brand were also left to handle APGA’s campaign flag-off.

“Any political party that consistently robs its own members will not endure, APGA inclusive,’’ she noted.

She also lamented that the report of the Sen. Victor Umeh-led Peace and Reconciliation Committee that visited her in Enugu few weeks ago which pointed the way forward for APGA, had been discarded by the governor and the party leadership.

Bianca, however, indicated that she remained hopeful that in spite of APGA’s current travails that the party has a fair chance of producing the next governor of the state.

She described the party as presently constituted as a field of ‘sorrow’ for so many walking wounded…from aggrieved aspirants, party members at the grassroots, as well as party stakeholders.

Reacting to Bianca’s charges, Mr C-Don Adinuba, Director Media, Soludo Governorship Campaign Organisation, said that the omission of Ojukwu’s image on APGA uniform was not a ploy to insult late Ojukwu and his family.

“It was a mistake by the person who handled the recent uniform the party printed,’’ he said.

Adinuba who is also Anambra Commissioner for Information said he was confident that Bianca had nothing against Prof. Soludo as APGA’s candidate.

“I am sure that in the next couple of days Bianca will join the campaign tour of Prof. Soludo,’’ he said.