In a post shared via his Instagram Stories on Wednesday, September 22, 2021, the music star described Saga’s behaviour as embarrassing.

“Saga being obsessed with another man’s lover who never seizes an opportunity to let him know about her love for her boyfriend. Now acting like an immature child on national TV in a game where 90 million is involved is nothing to celebrate or glorify abeg,” he wrote. 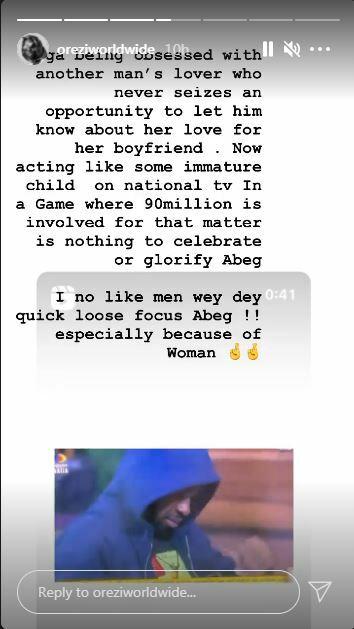 “I nor like men wen dey quick loose focus Abeg!!! Especially because of woman.”

It would be recalled that Big Brother instructed Nini during her Tuesday diary session, to pack a few toiletries and secretly leave the house.

The prank which took effect in the middle of the night is billed to last 24 hours.

Since her surprise exit from the house, Saga has become a shadow of himself. The former offshore engineer, at some point, broke down in tears as he was inconsolable.