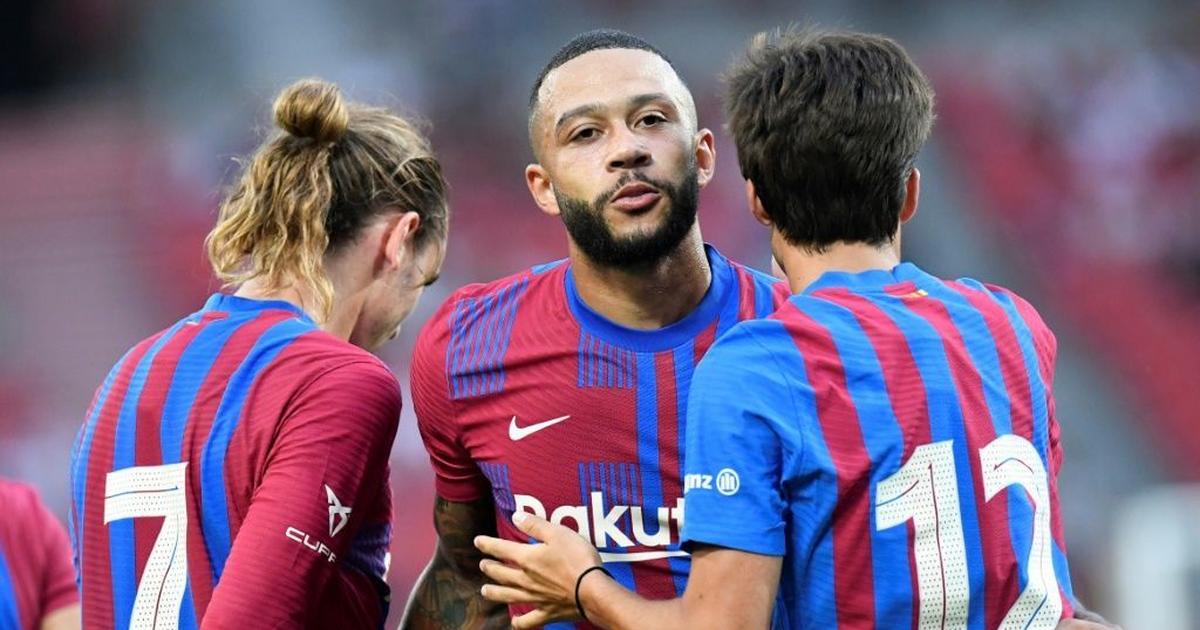 The Catalan giants are also still without injured winger Ousmane Dembele and close-season arrival Sergio Aguero as they look to rebuild despite being saddled with debt and only finishing third last season.

Koeman did win his first major trophy as Barca boss last term, his side thrashing Athletic Bilbao 4-0 in a Copa del Rey final in which Messi scored twice.

Martin Braithwaite stepped into the six-time Ballon d’Or winner’s shoes last Sunday by grabbing a brace, while Memphis Depay impressed on his debut after joining from Lyon.

Koeman admitted after the win over Sociedad that other players in his team need to step up without Messi — who scored 38 goals in his final Barca season.

“We no longer have a player who can decide the fate of matches on his own — now it will be a collective effort,” said the Dutchman.

Instability at the Camp Nou is also rampant off the pitch, with president Joan Laporta on Monday saying the club’s financial problems are “worrying”.

He revealed that Barcelona’s debts stand at 1.35 billion euros ($1.58 billion) and that their wage bill is at least 25 percent higher than their competitors at 617 million euros.

Philippe Coutinho, among those high earners, was not part of the matchday squad against Sociedad and has been linked with a return to the Premier League — where he previously starred for Liverpool.

Veteran centre-back Gerard Pique, who scored last weekend, could miss out with a calf problem against Athletic.

Atletico Madrid took advantage of Barcelona and Real Madrid’s on-pitch woes to win La Liga for the first time since 2014 last season and kicked off their title defence with a 2-1 victory at Celta Vigo.

Diego Simeone’s Atletico on Sunday welcome Elche to the Wanda Metropolitano, where fans will be present to celebrate their 2021 title triumph.

Real have also seen plenty of change in the close-season, with coach Zinedine Zidane departing the club to be replaced by former boss Carlo Ancelotti.

The long-serving defensive duo of Sergio Ramos and Raphael Varane have also left, for PSG and Manchester United respectively, although David Alaba will be expected to plug one of those gaps after his move from Bayern Munich.

Ancelotti brought Gareth Bale back into the fold for a 4-1 thumping of Alaves last week when Karim Benzema, who is reportedly set to sign a new contract, netted a double.

All the focus at the Santiago Bernabeu remains on the chase of Kylian Mbappe, who is still yet to agree a new deal with PSG.

This Sunday, though, Los Blancos will be bidding to continue their strong start at Levante.

The Netherlands international, alongside Antoine Griezmann, will have to shoulder plenty of responsibility at Barcelona in the absence of Messi, despite having only just arrived in Spain.

Depay’s last move to a big European club ended in disaster as he left Manchester United in 2016 after scoring just two goals in 33 Premier League games.

But he has enjoyed a fine spell at Lyon, where he scored 20 times in Ligue 1 last season, and could be ready to step up at the age of 27.

Three: Wins for Levante in their last six matches against Real Madrid.

17: Years since a team other than Barcelona, Real Madrid and Atletico Madrid won the title.