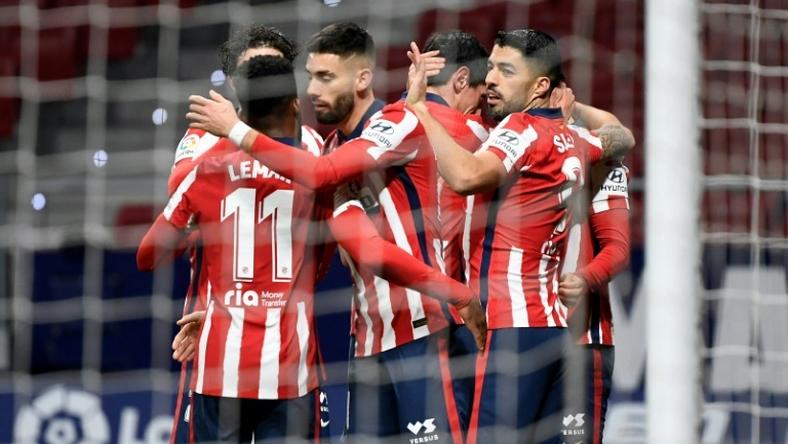 AFP Sport rounds up some of the main talking points from across the continent:

Atletico Madrid are towering over their rivals atop La Liga after beating Valencia 3-1 on Sunday, inspired by goals from Joao Felix and Luis Suarez.

Diego Simeone’s side had to come from behind to get the points, three days after Suarez’s late penalty secured a 2-1 win at Eibar. Real Madrid won 4-1 at Alaves and Barcelona were 2-0 winners at Elche but this is Atletico’s title to lose now, even if the season is barely at its midway point.

They are seven points clear of Real in second, and 10 above Barcelona in third, with a game in hand on each.

“The best way to live in this moment is to take it one game at a time,” said Simeone, repeating the mantra that worked wonders in Atletico’s last title-winning campaign in 2013/14.

The Bundesliga is arguably the most exciting league in Europe just now and yet any hopes of a lasting title race are fading after Bayern Munich went seven points clear, making the most of slip-ups by their challengers.

Hansi Flick’s side have bounced back from a recent blip and their 4-0 crushing of bottom team Schalke was their third win in eight days.

It came after second-placed RB Leipzig lost 3-2 at struggling Mainz, leaving them with just one win in four.

Meanwhile third-placed Bayer Leverkusen, superb in beating Borussia Dortmund in midweek, lost at home to Wolfsburg. Dortmund have slipped to seventh after losing 4-2 at Borussia Moenchengladbach, a result which underlined why they are apparently so keen to make Gladbach’s Marco Rose the long-term replacement to the sacked Lucien Favre.

AC Milan’s resurgence has been remarkable and they are top at the halfway point in Serie A, meaning they earn the symbolic crown of winter champions.

However, they slumped to a 3-0 home loss against Atalanta at San Siro, a second defeat in four following a run of 27 league games unbeaten.

That suggests they may struggle to hold onto top spot in the run-in, and they only remain two points clear after Inter were held 0-0 at Udinese.

While reigning champions Juventus beat Bologna, maybe irrepressible Atalanta are the ones to really look out for. The Bergamo side are, like Juve, seven points off the lead, but they are 10 games unbeaten, a run which has seen them score 26 goals while beating Milan and Roma, and drawing in Turin.

Neck and neck in Ligue 1

Paris Saint-Germain are finding their form under new coach Mauricio Pochettino if Friday’s 4-0 thumping of 10-man Montpellier was anything to go by. With Kylian Mbappe scoring twice and Neymar on target on his 100th appearance, they showed they will take some stopping.

However, the good news is there is a proper title race in France, with Lille grinding out a superb 1-0 win at Rennes thanks to Canada striker Jonathan David and Lyon winning a one-sided derby 5-0 against a Saint-Etienne team decimated by a coronavirus outbreak.

PSG and Lille are level on points, with Lyon two points behind in third. And perhaps even Monaco could get involved yet. They beat Marseille 3-1 and are six points off top spot in fourth, having scored 14 goals in winning their last four games.

More to come for Sporting?

Sporting Lisbon claimed silverware by beating Braga 1-0 in the Portuguese League Cup final thanks to a goal from young Spanish defender Pedro Porro, who is on loan from Manchester City.

It is the third time Sporting have won the trophy in four seasons but this time they will hope it is simply a precursor to the big one: not since 2002 have they won the league but this season, with talented young coach Ruben Amorim, they are unbeaten after 14 games and are four points ahead of Benfica and Porto.