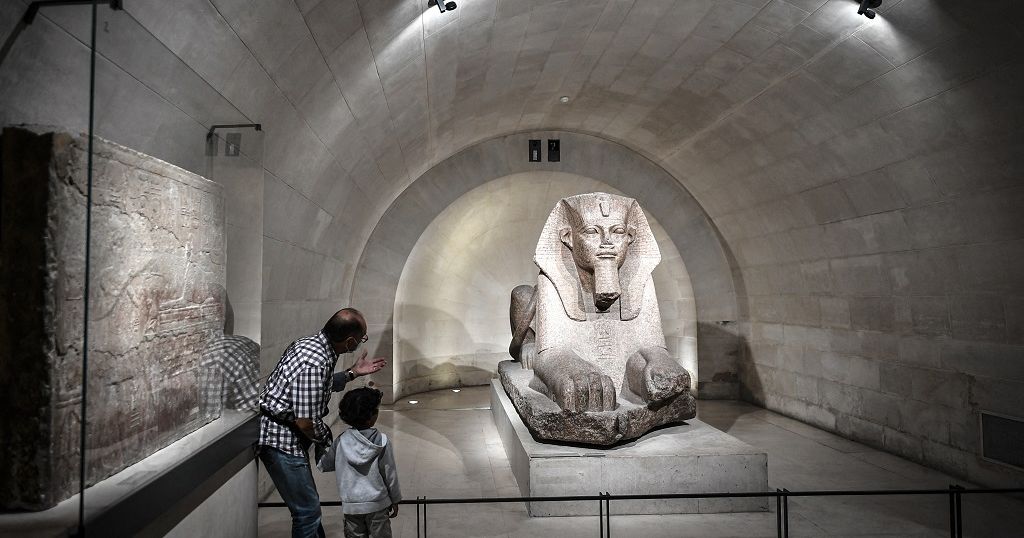 As per an announcement on Thursday, the Louvre museum in Paris, France reopened its first topical space of three rooms of the Department of Egyptian Antiquities — including the mastaba (i.e. tomb) of Akhetep and the restored statue of the dog of Asyut.

This comes after a major two-year renovation campaign and visitors can now rediscover this new museography devoted to the life of the collections.

The first introductory room the giant stele of the vizier Senousret and the Dog of Asyut — an exceptional limestone statue of a large seated dog.

Vincent Rondot, the director of the department of Egyptian antiquities at the Louvre; described the exhibit.

“This monument dates from the fifth dynasty and is from the same period, from the same state of civilization of Egypt’s former empire. It is what is called a “mastaba”, i.e. the tombs of very high state officials, members of the court, often of the king’s family. “

Each block of the mastaba was dismantled, cleaned, restored, photographed and digitised in early 2019.

The intricate dismantling process revealed a moving discovery of a sheet of paper containing a written message by the craftsmen who had moved the chapel in 1932.

The message reads: “The ancestors salute you. Farewell.”

Rondot shared more descriptions of the monument with the media.

Visitors can behold one of the most beautiful funerary monuments of the Old Kingdom as well as explore an exhibit known as the Nile and the Gods — with pieces restored to their respective monumental states.

Adrien Sicart, a visitor, appears impressed and happy with the works.

“This showcase is particularly strong because it presents the gods and their associations, their names, the relationship between each one, and it is extremely clear and synthetic, and then it allows you to explore all the Egyptian symbols, like the ones I wear, connecting them to the gods.”

The Louvre officially reopened its doors on May 19 After more than six months of closure due to the unprecedented COVID-19 pandemic.

In addition to other coronavirus prevention sanitary measures — both staff and Visitors alike aged 11 and over are required to wear masks.