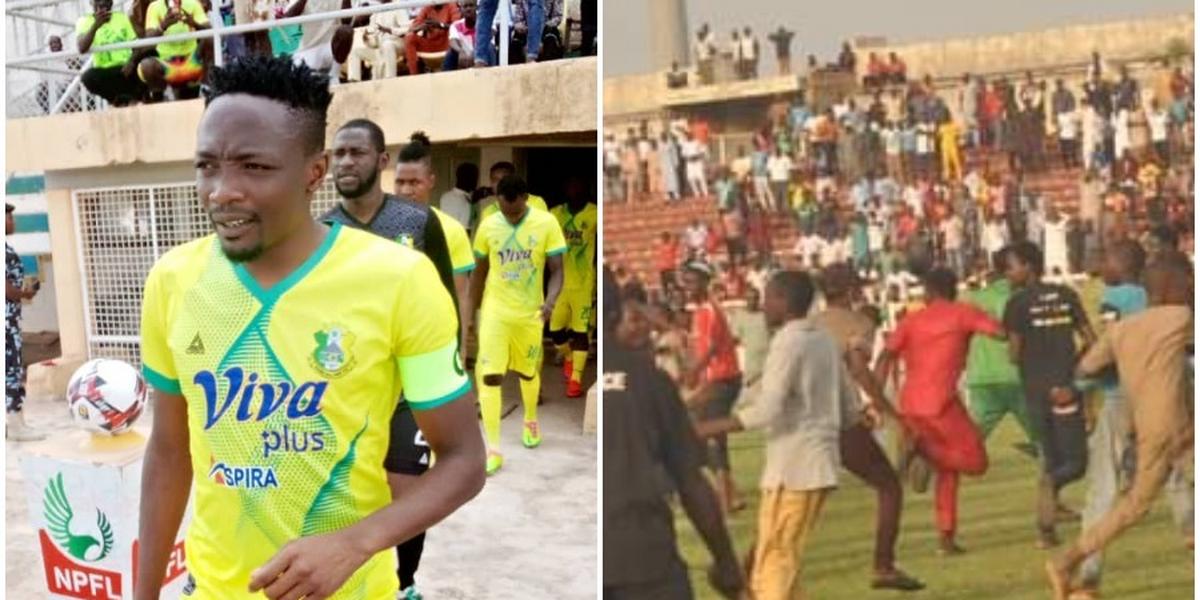 With Super Eagles captain Ahmed Musa on the pitch, Pillars were playing a goalless draw with visitors Akwa United when the referee ruled a goal offside in the 85th minute.

The home fans at the Ahmadu Bello Stadium in Kaduna thought otherwise and got infuriated.

The angry fans stormed the pitch to express their displeasure and throw the game into chaos.

The fans invaded the Ahmadu Bello Stadium in an attempt to beat the referee and his assistant.

Players from both sides, including Musa, took to their heels to take shelter in the dressing room.

Nevertheless, the game was concluded on Monday morning and it ended in a 0-0 draw.

Since its inception, crowd trouble has plagued the NPFL, and Musa is calling for drastic changes following Sunday’s incident.

The Nigeria international who chose a return to Pillars to remain active and also promote the league stated that incidents like this would discourage players of his status from making the same move.

“In a bid to be patriotic or represent our home country, some of us decided to play for the league with pleasure,” the forward said on social media.

“In as much as I commend officials who handle games in the leagues across Nigeria, it is imperative to add that a lot still needs to be done to keep our football growing to the heights it deserves.

“There are a lot of areas that need to be worked on so that players can be at their optimal best and play football as it should be in accordance with the laws of the game where fair play is enshrined by all and sundry.”

The 29-year-old further called on the stakeholders to raise the level of the game in Nigeria and urged the fans to stop taking the law into their hands.

He further expressed optimism that Nigerian football would get better and stated that players would love to come back and play in the local league.

After opening his current campaign with an assist, he has played in a host of games for Pillars.

The League Management Company (LMC) who organises the league have fined Kano Pillars for the incident.

They are to pay N5m for breaching the COVID-19 Protocol, N2.5m and deduction of three points, which is suspended for the duration of the remainder of the season, subject to good conduct.