The continental case load crossed the 400,000 mark as of July 1 according to John Hopkins University tallies. The death toll also surpassed 10,000.

Africa’s figures continue to be very low compared to other continents. Europe and America alone accounted for over 50% of cases when the WHO recently confirmed that global figures had gone past 10,000,000.

Over in South America, Brazil remains one of the worst impacted along with Iran in the Middle East. Russia and India also have very high case loads.

The active cases were at 151,937 with recoveries at 146,337. The continent’s most impacted remains South Africa whose tallies are almost a third of confirmed cases – current case load stands at 97,302.

Concerns continue to be raised across the continent relative to testing strength of countries especially at a time when the virus is said to have reached the stage of community transmission in most places.

Despite that, governments are easing lockdowns and reopening economies as populations are urged to embrace the new normal and play a more active role in helping to combat the virus.

Confirmed cases of coronavirus across Africa passed the 100,000 mark barely 24-hours after the deaths hit 3,000. This is according to tallies from the John Hopkins University tracker. 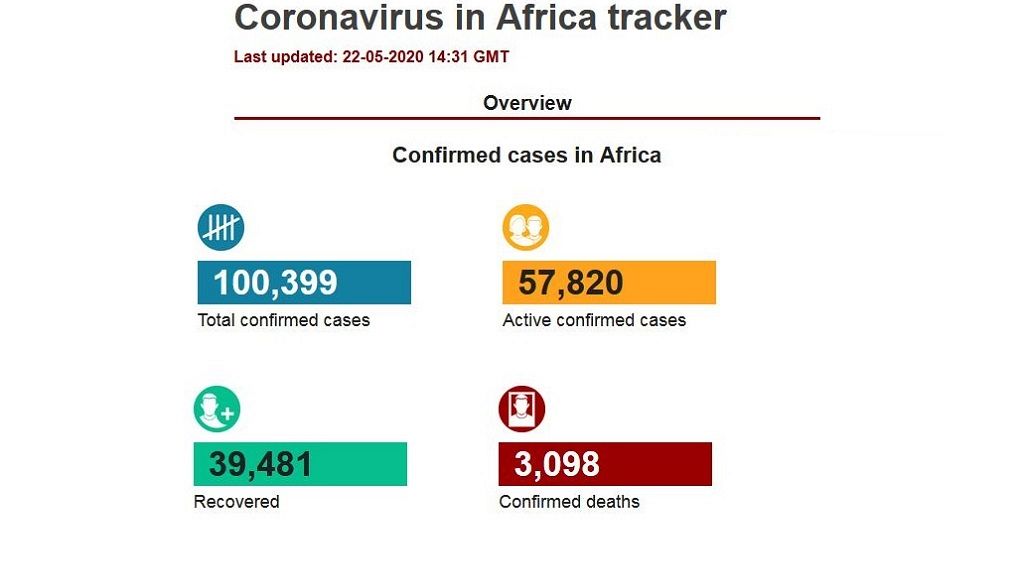 The five most impacted nations were as follows:

South Africa is the most impact across the continent and in the southern African region. Egypt tops across North Africa and Nigeria in West Africa. Cameroon is the leader in Central Africa with 4,288 cases whiles Sudan tops in the East / Horn of Africa region with 3,138 cases.

Confirmed cases of coronavirus passed the 20,000 mark barely 24-hours after the deaths topped 1,000. This is according to tallies from the John Hopkins University tracker.

Egypt remained the continent’s most impacted whiles the North African region generally contributed for some of the highest numbers. Egypt with 2,844 cases, Morocco with 2,600+ cases and Algeria with 2,418 confirmed cases.

Meanwhile the United Nations Economic Commission for Africa, UNECA, has warned that cases could spike across the continent as more testing is rolled out in the coming weeks.

Africa could see 300,000 deaths from the coronavirus this year even under the best-case scenario, according to a new report released Friday that cites modeling from Imperial College London.

Under the worst-case scenario with no interventions against the virus, Africa could see 3.3 million deaths and 1.2 billion infections, the report by the U.N. Economic Commission for Africa said.

Even with “intense social distancing.” under the best-case scenario the continent could see more than 122 million infections, the report said.

Any of the scenarios would overwhelm Africa’s largely fragile and underfunded health systems, experts have warned. Under the best-case scenario, $44 billion would be needed for testing, personal protective equipment and treatment, the report said, citing UNECA estimates. The worst-case scenario would cost $446 billion.

Since the virus arrived on the continent on February 14 in Egypt till date, the number of confirmed cases stood at 19,417 whiles recovered cases were 4,546.

The country with the highest number of fatalities being Algeria with 364 victims. Egypt despite being the continent’s most impacted in terms of infections have recorded 205 deaths as against Morocco’s 135.

Two African countries remain uninfected till date, they are Comoros and Lesotho. The United Nations has sounded a warning that Africa could be the next epicenter of the virus.

Meanwhile through the Africa Centers for Disease Control, the continent is seeking to roll out a million test kits to make up for shortfall in testing rates across the continent.