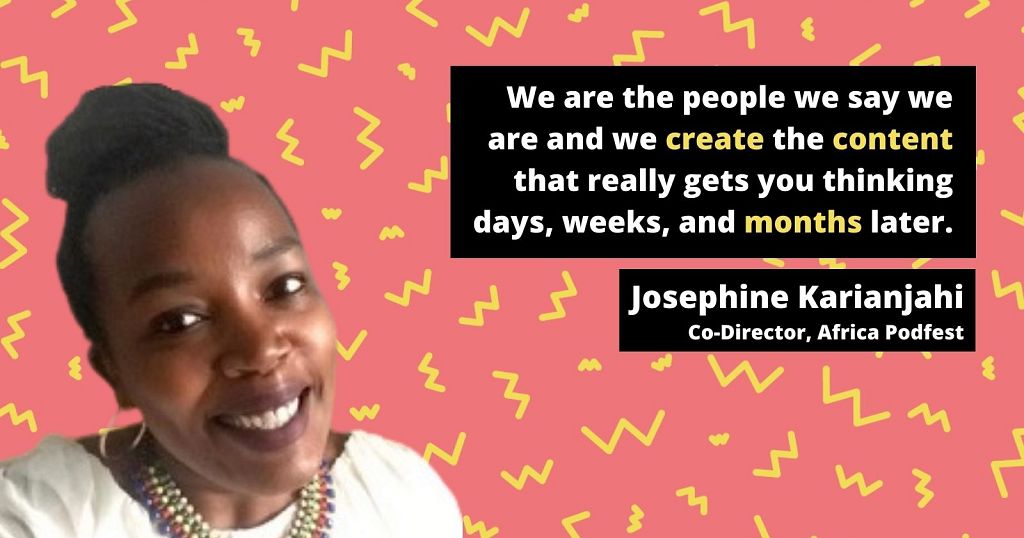 On February 12, the African podcasting community will celebrate the Africa Podcast day, which was started to shed light on its growing community on a continent where radio is the most widely-consumed media.

Our journalist spoke to the co-director of the event Josephine Karianjahi about the African podcasting scene, its challenges and prospects.

Africanews: Could you tell us about you and the Africa Podfest in some words?

Josephine Karianjahi: I got involved in podcasting in 2018 as a podcaster myself and also as a podcast listener. And because the online community around podcasting is so thriving, I got to learn about other African podcasters, people I should be listening to around the world in podcasting. And I connected with friends who are also in podcasting, like Melissa Mbugua, who is now the co-director of Africa Podfest.

We realised that there was a huge need for people to connect and exchange and really find ways to collaborate, find co-hosts, find studios, find techniques, improve the way that they’re producing and also celebrate each other. And so in terms of celebrating each other’s efforts, we as Africa Podfest decided to come up with Africa Podcast Day on the 12th of February every year. So this year is actually the second annual Africa podcast. And the theme of it is “We are proud to be here!”

Africanews: We know that radio is the most consumed media in Africa. What about podcasts?

Josephine Karianjahi: Podcasts are growing across Africa. We are excited because people are already used to consuming audio content. And in some cases, people are used to sharing audio and especially around entertainment, but increasingly around topics that affect the whole society. So podcasting in Africa is growing because people are very mobile-connected in a lot of parts of Africa.

Africanews: Why is audio so important in Africa?

Josephine Karianjahi: You know, growing up everybody had access to a radio or somebody in the compound or in the area where you lived or on the street where you lived or in any part of Africa. The radio is always on, almost 24 hours a day. And so we’re used to hearing this content. Audio is really popular.

But I will say that the big problem is that it doesn’t really represent all the different perspectives that are there across the African continent. So as much as you’re used to listening to your favourite presenter or your favourite news show, you really don’t necessarily have a lot of choice when it comes to listening to people who aren’t really included in the centre of the conversation.

I, for one, always find that I like to listen to more women developed programs, definitely a lot from people who don’t necessarily have access to a lot of resources because their stories are part of the lived realities of different African countries and they are part of my own memories and my own experiences as well.

So audio is really a big part about creating memories, capturing our own histories, which I think across Africa a lot of stories have been lost. And so people are really gravitating to podcasts about us as Africans.

Like in Zambia. There’s a great podcast called “Leading Ladies Zambia”, and they talk about all the women of Zambia’s history who are leaders in a context in Africa where a lot of women are not necessarily in leadership positions. We have this history. We just don’t hear it yet. So audio is really changing the way we think about our history. And also it’s giving us an opportunity to explore topics that are not necessarily covered.

And for this, I mean, talking about various aspects of masculinity, there are podcasts, including “Cry Like a Boy”, which you, of course, know very well. But there are also others. There’s “Letters to Boys” out of Nigeria that’s exploring different aspects of growing up as a boy, as a man in Nigeria and across Africa. And these topics don’t necessarily get heard across the radio.

I don’t know if it’s intentional or it’s anything like that. But what I can say is podcasts are allowing these stories to come out and also in a longer form. So we don’t have to wait till the advert yet. You know, you can listen to a whole hour of the program sometimes, maybe a bit less in a way that speaks to your lived reality and even gives you some hope as well.

Africanews: So could you tell us who are the African podcasters and what are the differences from other broadcasters from the rest of the world?

Josephine Karianjahi: In Africa, we found as Africa Podfest that research is not that deeply done when it comes to podcasting audiences. So right now, we are leading efforts to do more in-depth research in addition to the research that we’ve already carried out to explore this in a deeper context. And then in other aspects, people also listen to a lot of self-help or even self-development podcasts as well. And we found this from our own investigation as well.

Podcasting around the world is a very community-oriented space. And so a lot of times I’ve found that in terms of their interest, passion, excellence in podcasting, Africa and podcasters have no difference from the rest of the world. We are the people we say we are and we create the content that really gets you thinking days, weeks, and months later.

Where I find that differences is, of course, Africa is the cradle of mankind. A lot of our rich diversity, our culture, our stories, our context will be completely different from other parts of the world. And of course, 2020 has shown us that even as much as we might be restricted in our movement, people always want to connect. So African podcasters want to connect as much as other parts of the world.

We are ready for business, open for investment, but also open for advertisement. We’re open for direct injection of capital so that the people who are mostly podcasting, which is young people under thirty-five, are a big part of the new podcasting generation, can actually make a livelihood out of their talent and the content and the way that they are raising the bar.

Africanews: Where does Africa stand today in the podcasting landscape and where do you see it in the future?

Josephine Karianjahi: I think if you go into the individual countries, you will find that whereas people are listening to podcasts from around the world, a lot of African countries have their own podcasters at the top of that carousel for their region. And I think this is a huge shift because it explains that people are looking for and being able to find African content in their own countries.

In terms of where Africans stand, in terms of the kinds of topics that they’re addressing, the kinds of listenership that they’re getting. I think you have to really come and listen to African podcasters. We do that every week using our social channels, every single African podcaster’s journey is rich. It’s filled with really a lot of self-motivation and drive and talent, a lot of times with humour amid very challenging situations, maybe not necessarily having enough income to continue the podcast or not necessarily having steady electricity or a steady data connexion to be able to post your episodes, edit accurately and all the things that you need to get done.

Also, I think the idea that we could discover more African talent, if people realise that we across Africa listen to all kinds of podcasts, we are an audience that will listen to topics that cover the whole globe. But what the distinction is, is that we will also listen very keenly to our own podcasts.

I love that one day we will have as many African languages in podcasting as we do in Africa itself. We are headed there and it’s a slow journey, but it’s steady and the progress is going to really, really come out as a result of days like Africa Podcast Day, but also because of individual community members who themselves may not necessarily know that they’re building one brick at a time. But you can feel the space growing.

Africanews: Just to finish, do you get any inspiration from any podcasts around the world? Not specifically from Africa, but do you have any podcasts that you listen to?

Josephine Karianjahi: Yeah, absolutely. I know that my big motivation is always finding African podcasts in the diaspora. I really enjoy listening to podcasts like, of course, “Jesus and Jollof” is a big favourite. But also there are other podcasts like this one called “Dope and Damaged”, which is a podcast by a Moroccan woman who is creating content around various issues. There’s also a lot of women, black women, podcasters around the world who shaped my own definition.

I have listened most recently to a new podcast called “I Asked My Mother” by a journalist in Kenya and living abroad called Wanjiku Mwaura, and she’s talking to her mother about the motherhood journey, which is something you don’t necessarily get to do. I think for people who are living in different parts of the world who share roots in Africa, that’s a big reason why you’re reconnecting with podcasters, because they’re bringing home to you and actually through your mobile phone or your other podcast-listening device.

Africa Podcast Day by Africa Podfest was created for the region’s podcasting leaders to gather, share knowledge and connect with African and international partners.

During this festival, the Cry Like A Boy team will share their experiences on how to produce a multilingual documentary podcast between Africa and Europe without taking a flight

Cry Like a Boy is the first original podcast of Euronews in collaboration with Africanews, which aims to promote a cross-border discussion on gender roles, from the perspective of five African countries (Burundi, Senegal, Lesotho, Guinea and Liberia).

This podcast explores the pressures linked to ‘being a man’ in Africa and takes a look at how men are changing themselves and their communities for the better.