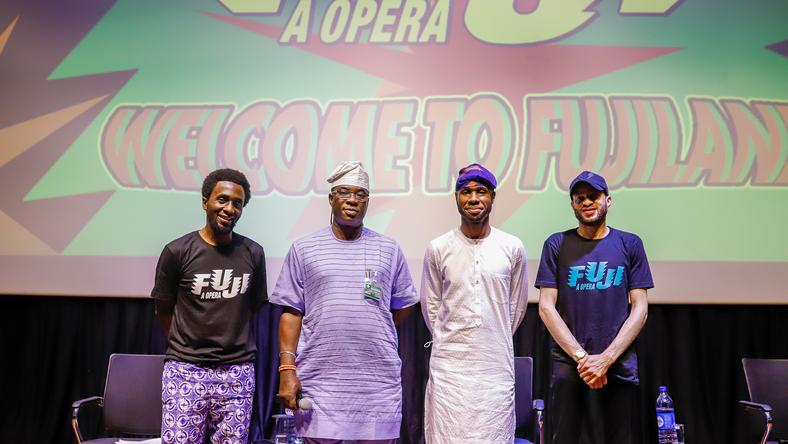 Pioneering Fuji founders such as General Ayinla Kollington, K1 De Ultimate and other icons were present to celebrate Fuji at the commencement of the week-long spectacle in Lagos.

Fuji: A Opera explored the music genre and its sub-culture through archive footage, costume, memorabilia, and imagery.

The multi-platform exhibition also showcased an awe-inspiring futuristic presentation of Fuji, to promote a more positive contemporary image of the indigenous multi-genre fusion locally and globally.

Fuji maestro, General Ayinla Kollington and the Fuji Musicians Association of Nigeria cut the ribbons at the historic grand opening on Tuesday. Alhaji Kollington went on to immerse guests in the long and enigmatic history of Fuji with facts and anecdotes.

The legendary Fuji singer took the audience through the rich and colourful history of the musical genre which he expressed to be one that is rooted in philosophy, activism, artistic virtuosity and also needs reinvention.

These are five things we learnt from the two-hour lecture moderated by Lehle Balde and Yemi Shodimu.

Unlike when K1 was in his music prime, Fuji is no longer one of the Nigerian music industry’s dominant genres. The genre has seen the likes of Afrobreats, and gospel etc. become dominant.

That worries the legend who revealed that acceptance is the biggest challenge Fuji is currently facing.

With the genre coming from the Southwest and mainly done in Yoruba, it has struggled to grab nationwide acceptance.

Different tribes, languages, religions, and modernisation are things K1 pointed out that have held the genre back.

2. Why he sings about politics

Politics is a regular subject in K1 records, and he was asked why he does that.

3. K1 says he will never run for office.

Asked why he decided to join politics, the 63-year-old said he did that to help the society.

“I can see the problem between the political class and the people,” he said.

Despite his involvement in politics, the music legend said he would never run for election because he can’t follow in the Nigerian politicians’ ‘promise and fail’ attitude.

4. His thought on #EndSARS movement

One of the most significant events of 2020 in Nigeria saw young Nigerians took the streets all over the country and in several cities across the world in protests calling for the end of the Special Anti-Robbery Squad (SARS), a notorious unit of the Nigerian Police Force.

The protests and some incidences surrounding it drew reactions and grabbed headlines all over the world.

K1 was asked about his thoughts on the protest, and the music legend said he agreed with it. He urged the government to yield to the demands of the youth.

“It’s a movement that binds all of us together,” he said.

K1 has had his share of controversies, but he believes they come because of his personality.

6. How he has maintained his impressive performances

K1 might be in his 60s, but seeing him perform, you would never know that. The Ijebu-Ode-born legend said he maintains a healthy lifestyle that has helped him continue his energetic performances.

He said he does not smoke because he believes it weakens someone. He only drinks on occasion and makes sure he sleeps and rests well.

He also believes that practice makes perfect, and since he has performed since he was 15, it is now easy for him.

7. How he manages his money

K1 has been in the game for so long, and music has afforded his wealth. Asked how he makes and manages his money, he mentioned investments.

He revealed that he does not use his money stuff like clothes and shoes.