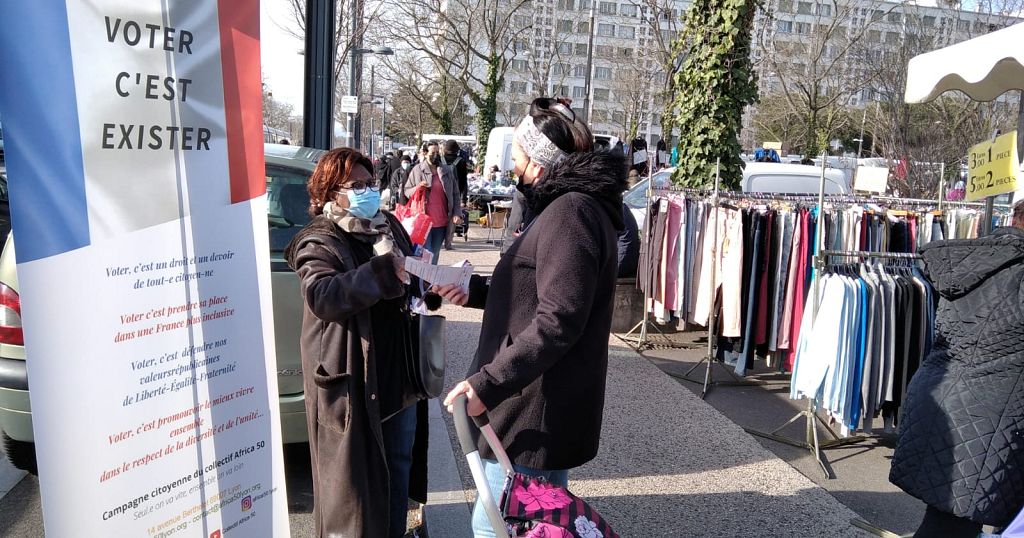 On Sunday, voters in mainland France will head to the polls to choose the new French president. Incumbent head of state Emmanuel Macron is facing candidate Marine Lepen. With 26% of voters who did not take part in the first round of the election, abstention continues to grow. Achiata Djiman and Ya Mutualé are part of Africa 50 Lyon, a collective gathering associations that celebrate African and Afro-Caribbean cultures in the south-east of France. When the collective noticed a growing abstention in the diaspora a few years ago, they launched an initiative to promote citizen participation. Their goal? Keep democracy alive in Europe and continue to inspire democratic progress in Africa.

You launched the citizen campaign “To vote is to exist” back in 2010. What prompted you to do so?

Ya Mutualé, in charge of intercultural at Africa 50: In fact, what turned into a citizens’ campaign was supposed to be a one-time event for the members of our associations. At first, the initiative was a way to celebrate the 50th anniversary of the independence of the sub-Saharan African countries from which most of us come. We wanted to mark the occasion by reflecting on the past, and by asking ourselves where the independences had led our countries. We also wanted to discuss the future that could await African democracies.

Moreover, we had noticed a growing lack of interest -maybe due to disappointment- in the electoral process within the diaspora. People were jaded, particularly in regard to French policies towards Africa and sub-Saharan Africa. However, when the event was completed, we perceived a demand; there was no similar initiative in the cultural offer of our metropolis. At the same time, we realised that the lack of interest in ‘the political’ was general in France. We then formed a collective of associations and have been mobilising ever since at all presidential and legislative elections.

Has encouraging your fellow citizens from all backgrounds to vote become a commitment of yours?

Achiata Djiman; coordinator of the campaign “To vote is to exist”: Indeed, it is something that is particularly dear to our hearts! We thought of a way to carry out this action for our citizen participation to have an impact in the region we live in. We have become builders of citizenship in a sense. Citizenship is not limited to papers which testify that we are French, it goes through voting. Citizenship is a commitment, a citizen has duties, including that of keeping democracy alive.

With abstention becoming rampant, it was essential for us to raise awareness, to stimulate each citizen to exercise their power to choose. But also to encourage them to check whether they were still registered on the electoral roll. So without knowing who had the citizenship or who did not, we went out to meet inhabitants. We approached everyone and those who told us they had other nationalities took the time to listen to us and discuss how important voting is. We don’t always have that in mind but a ballot, plus another one and another one, makes up a sum of ballots. So that at the end of the counting, a citizen can proudly say that a candidate has been elected thanks to their participation.

Where did you campaign this year?

When we launched the campaign in December, we went to the La Guillotière neighbourhood, which has been one of the emblematic districts of Lyon’s diasporas, from the time when Italians arrived to Asian and African diasporas which are now significantly represented. We went to the metro stations and public transportation, we visited the grocery stores, the market of the 8th district of Lyon, the stores selling products from elsewhere.

During these sessions, we met other associations, including the Bonnefoi social center, and with them we organized an activity that we called the palaver tree. It was a reference to African cultures and societies for which discussing is a real institution with the objective to allow the expression of problems, the sharing of what goes well with the aim of regulating the social life. We were thus able to meet with elected officials, inhabitants, and pupils. This gave rise to some edifying exchanges.

How is your contribution to your motherland made effective through your vote and, more broadly, through your commitments here in France?

A.D: We have to be aware of what is going on in the territory where we live, where we are at home. We are committed here first because participating in the management of the city is our right, we do not have the right to exclude ourselves: everyone has a part to play. We have seen in recent months the changes of political regimes in several West African countries. We have seen a failed democracy. So I resolve to see how we can work to keep democracy alive here. It seems to me that if we want to make people think that democracy is a good way, we have to commit ourselves to strengthening democracy here. So that everyone is aware that the people, alone, can have power; that the rights of citizens can be respected and that political renewal is possible.

In addition to the concerns that you share with your fellow citizens, such as health, purchasing power, etc., are there other issues to which you are more sensitive because of your diverse cultures?

Y.M: I like to say, like the elders that “We are from where we come from as we are from where we live”. This double belonging – I am a first generation immigrant – gives us a double consciousness. We are aware that we must fully take our place and our role here and we share the vicissitudes, the joys, the happiness, the difficulties and the failures of the countries from where we came.

We are also economic actors because we show solidarity and we participate in the life and economy of our families still living there and of the population. I am thinking in particular about the contribution of diasporas on the financial level which is regularly underlined in relation to public development aid.

What is your aspiration for France for the next five years?

Y.M: Indeed, one of our challenges is to work so that our fellow citizens are not afraid of diversity but can see in the “other” an opportunity for alliance, friendship and partnership. African cultures give us the intuition that the foreigner can, at first glance, represent either a danger or an opportunity. It is up to us to seize the opportunity so that it prevails.