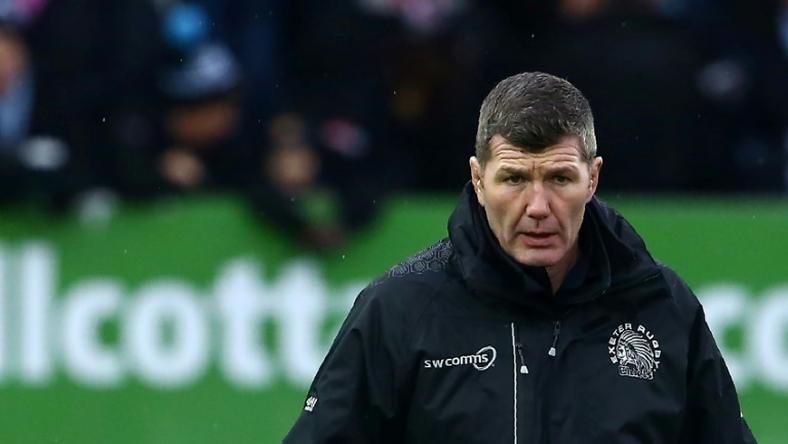 Although they have been in existence for nearly 150 years, Exeter are not traditionally one of England’s powerhouse sides.

Yet they are on the verge of becoming only the fourth English club after Leicester, Wasps and Saracens to complete the prized double.

“We’re in this scenario where we could have a great season or not win anything still,” said director of rugby Baxter. “These are one-off games. You should be excited about it.

“I think the most important thing is to get emotionally recharged. If we can get to that game in Bristol against Racing and we can be full batteries emotionally, we can make that one hell of a performance.”

Baxter has been a central figure in Exeter’s rise to the top of the English game, providing continuity alongside long-serving chief executive and chairman Tony Rowe.

The 49-year-old Baxter made more than 300 appearances for the southwest side, serving 10 years as club captain.

Appointed head coach in 2009, he guided Exeter to promotion from the second-tier Championship to the Premiership just 12 months later.

Rowe, a former powerboat racing champion, has been a steady hand off the pitch, overseeing the club’s move from their run-down County Ground base in 2006 to the state-of-the-art Sandy Park stadium, which houses a conference centre and will be the site of a 250-bed hotel.

After establishing themselves in the Premiership, Exeter emerged as the challengers to a Saracens side packed with England internationals, finishing runners-up to the London team in 2016 before being crowned Premiership champions for the first time the following year.

Since then they have finished as runners-up twice more to Saracens. But the London club were relegated this season from the English top-flight after breaches of salary cap rules.

“Our expectations, whatever the competition, whatever the game, it’s to go out and win,” he said. “That has never changed in all the time I’ve been at the club. I guess the big difference now, between say a few years ago, is that we’re not maybe so naive in what we do.

“As players you can work on fitness, on strength, on your skills, but the one thing you can’t buy in is experience. You earn that from playing, especially in the big games.”

Exeter have also been shrewd in their signings, bringing in Scotland star Stuart Hogg to add flair to their traditional forward strength while Scottish international Jonny Gray made his debut in August.

One man who has been part of the whole journey from the second-tier Championship to the brink of European glory is Gareth Steenson, who starred in Exeter’s promotion-clinching win over Bristol in 2010.

“Being in back-to-back finals is pretty special,” said the 36-year-old Northern Irishman. “I didn’t think I would see those days. I thought I would be watching from afar.

“Racing 92 is probably the biggest game the club has ever faced and the emotional levels should be there, so it will be about how we show up,” he added.

“To give ourselves a shot of achieving everything we set out to do is incredible but we know there is a heck of a lot of hard work to be done.”

Aguero out for up to a month says Guardiola