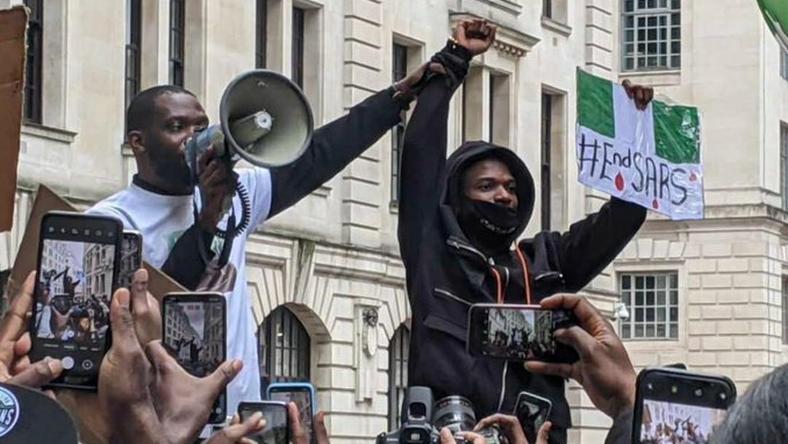 For several days, young Nigerians have been campaigning for the scrapping of the Special Anti-Robbery Squad (SARS) which has spiralled into street protests across several cities in Nigeria.

Nigerians in the diaspora were not left out as hundreds of Nigerians took to the Nigeria High Commission in London to join the protest back home.

Wizkid pulled up to the protest and addressed the crowd present.

At the time of his address, the Inspector General of Police had already announced the disbandment of SARS and the 30-year-old said it was a sign that Nigerian youths have a voice.

“For Nigerians youths, don’t let anyone tell you you don’t have a voice,” he told the crowd.

“This is just the beginning!! We won our fight to #ENDSARS .. now Reform the Nigerian police!! #Endpolice brutality! We deserve good governance,” he later said on Twitter.

“Now my people .. you see what our voices did…this is the beginning of a new Nigeria! Nigerian youths!! Know your rights and fight for it ! You deserve it. We all deserve it!!”

“This is not about me/You or any individual !! This is for us and the next generation to come! Love everybody! Red heart.”

Wizkid has been involved in the campaign from the get-go. His first involvement in the on-going campaign came on Sunday, October 4, when he took to Twitter to call out President Buhari over his silence.

“Old man! Police/Sarz still killing Nigerian youth on a daily! Do something! Nothing concern u for America! Face your country!!” Wizkid said to the President on Twitter.

Wizkid has been in London for a couple of months rounding up production for his heavily-anticipated fourth album Made in Lagos.