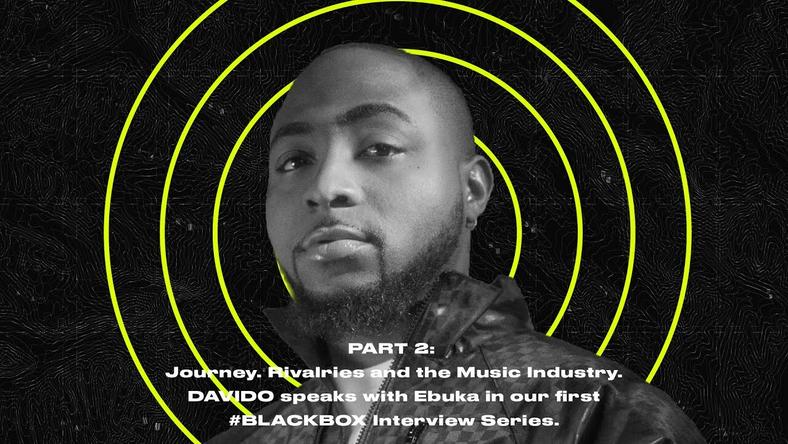 Her sister, Sharon was born there and later, he came. However, he is the only one who lived in Nigeria – of all his siblings. He also discussed how he used to be a Hip-Hop head, who used to love 50 Cent before getting inspired by the Mo’Hits Crew to make music after a chance meeting in a club.

While his dad wanted forced him to go back to school and he wanted to oblige, the plane that took him back to the US for school also had Wande Coal on board. The next day was the video shoot for D’Banj‘s ‘Mr. Endowed [Remix]’ featuring Snoop Dogg. Davido broke his SIM card and didn’t go to school for one year.

After Davido’s dad realized that his song wanted the music, he found him money for a studio which Davido started giving people for free. Through that venture, he met Sauce Kid, Mo’Cheddah and many other acts. But still, he had to finish school. While he wanted to attend the University of Lagos, his dad made him attend Babcock and made him stay in the Vice Chancellor’s house.

Shortly after, he shot a video for ‘Back When‘ featuring Naeto C. Davido’s dad paid Naeto C over one million naira after Asa Asika, who is Naeto’s cousin made the connect. While he respects Naeto C, he says, “Nobody helped me get here but God. I feel like I would have made it in any industry.“

In May 2021, Davido’s run will hit 10 years in the Nigerian music industry. What keeps him going is still the haters. However, he realizes and says that nobody will be on top forever before he called Mayorkun his succession plan.

In previous interviews like The Truth with Olisa Adibua, and on his Twitter, Davido had previously admitted to being a fan of Wizkid’s in the early days. He has also severally noted that Wizkid inspired his entire generation. In a very snide spat with Burna Boy, Davido also called himself and Wizkid the two greatest of all time.

Here he says, “I wouldn’t exactly say he influenced me, but I saw a young n*gga getting it and that was the first time… ‘Cause D’Banj, Wande… I wouldn’t say they were old, but [Wizkid] was young, bro and actually getting it. That motivated me a bit…“

On how he met Wizkid, he says, “We used to have this Christmas parties in my dad’s house and Asa Asika invited Wizkid who was the hottest thing at that point. I met him that time, but we didn’t link and then I met him again when I came back. Me and Wiz dey roll o… Wiz was in ‘Dami Duro’ video.

Davido then discussed how things started to get weird between the two of them as he got bigger – especially after he dropped his debut album. He says, “It’s the competition that caused it… I love Wizkid and I know he loves me too…”

Davido did say that listening to the fans make beef bigger. Davido then revealed that he’s tried to do an album and a tour with Wizkid.

Davido says that if people were to sop listening to him tomorrow, he will never go hungry. He says that he recently did a song with D’Prince‘s new artist – after Rema. He says, “The people I help are keeping me afloat. My own coming down, as I’m coming down, dem go dey push me back up…”

You can watch Pulse Nigeria’s breakdown of the drama between Davido and Burna Boy below;

First off, Davido says, “Burna Boy is my brother…” and that he prefers to keep everything on the music, but he also says, “I will never back down, I’m not a p***y.” He says the last time he saw Burna Boy was in December 2019, but by then he had already started hearing things.

While he says ‘FEM’ is not a Burna Boy diss song, he says the song is for everybody doing bad things to him. When he was asked if Burna Boy and Wizkid’s link up in London means they are against him, he replies in the affirmative.

To him, if the three of them are the biggest in the game and two are linking up to the detriment of the other, then it means one thing; beef.

Davido has known Burna Boy since 2010 and they used to hang out. He says that he’s said it many times that Burna Boy should be No. 1. He also remembers a funny incident when he, Burna Boy and Dammy Krane got arrested by the police. He says, “Me and Burna can’t be in a room and argue or fight.

“I was the happiest for Burna’s success… Me and Burna can’t even have wahala… Grammy nomination, I’m happy. It doesn’t take anything away from me. Even his PA, he knows what I did for him.”

Davido confirms Burna Boy was angry at the picture he posted in May 2020. He says, “His guy told me, but you’re with Wizkid in London everyday. If dem wan do all those join together come at me, e nor go work. I’m not fighting them.”

However, Davido also says, “I don’t want to be violent… I got kids, bruh. Do you want to be violent or go into the studio? Dele Momodu, I did it. Caroline [Ekanem], I did it… I’ll answer you. You wan shoot me and go to jail? There are bigger things. Nobody can tell me why he’s fighting me.”

He sees Wizkid’s and Burna Boy’s collaboration as rooting against him and calls it wack. He says, “I can’t lie. It hurts me sometimes. I’ve tried to reach out [to Burna]. It’s [probably] one thing, he doesn’t like me. I’m not fighting anybody, they just like to make me look like the bad guy.”

Did money make it easier for Davido?

The answer is simple, “I think [money] made [acceptance] harder. Nigerians love a grass to grace story. I had to over-work, but as a real n*gga, I would say it made things easier a bit.”

The EP heralded Davido’s first international sojourn, but he failed with it and came back. Now, he calls Son of Mercy EP, “Sh*t.” He continues, “I won’t [say I regret it], because without it, I won’t ginger to come back to Nigeria. After I signed my first Sony deal, I thought it was the greatest thing ever. They wanted me to sound like who I wasn’t.“

After Davido got back, he had one of the greatest one year runs Nigeria has ever seen with ‘IF,’ ‘FIA,’ ‘Fall’ and ‘Like Dat.’ He says, “Tekno brought me back. I didn’t have a hit for almost a year, bro. You know wetin happen, Tekno dey tell me say, ‘David, I get one song oooo…’

“But me, I like jaye… I dey club. One day, Tekno came to Quilox to drag me. I’ve never met anybody that wanted me to do a song that much. Tekno wrote it, there’s also a Tekno version of the song. He dragged me to his house and we recorded it while I was drunk.’ The next morning he called me, ‘O.B.O, this thing na hit o…’

“I was in Gabon and played ‘IF.’ From there, I flew to London, came back and dropped the song… Everybody started calling me. I said ‘Ope ooooo, finally’ [Laughs]”

Davido says A Better Time is “just a album.” Some things he said on the album, he already said on Cool FM with Gbemi and Segun Emdim.

Watch the full interview below;