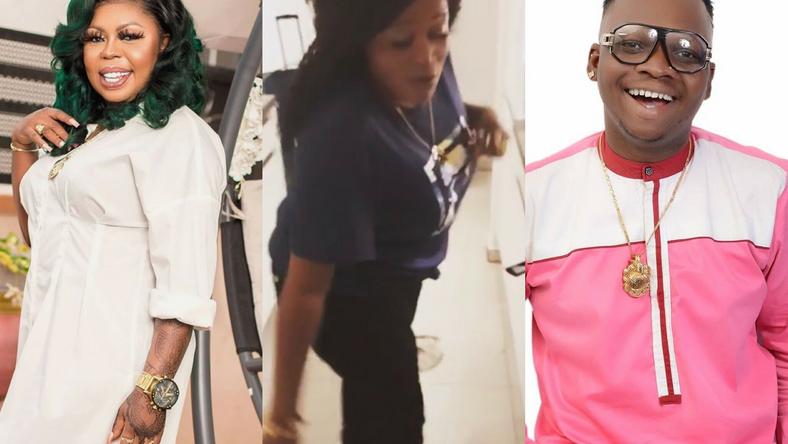 Two weeks ago, Nana Tornado tore into the controversial TV host over her involvement in Akuapem Poloo’s recently leaked nude video, saying Afia Schwarzenegger is a liar and that she hates the socialite for no reason.

In 2019, when they freshly fell out, he alleged that Afia Schwarzenegger has secretly been sleeping with women and he has witnessed her in homosexual acts a couple of times. He added that she is a thief.

Now, the beef has taken a new turn. Afia Schwarzenegger’s father, Augustine Agyei, is now ‘entangled’ in the fight.

In a new video which has gone viral on the Internet, Nana Tonardo is seen with a friend making mockery of Afia’s father.

In the video, they said Afia Schwarzenegger’s father lives at Atonsu – a town in Kumasi – and that he walks like a cripple.

Nana Tonardo’s friend, who is known as ‘Auntie Serwaa’, went to the extent of walking like a cripple and attributing it to Afia Schwarzenegger’s father.

“This is not funny at all…disrespecting someone father is disrespecting your own as well,” an Instagram user said. Another user also stated: “What kind of disrespect is that!! What has her family got to do with the issues you’ve got with her.”

Another user added: “What’s funny here..? Going against Afia is okay but what has the Dad got to do with this..? Can anyone give what the Dad has done..? Ghana deɛ oh daabi”.