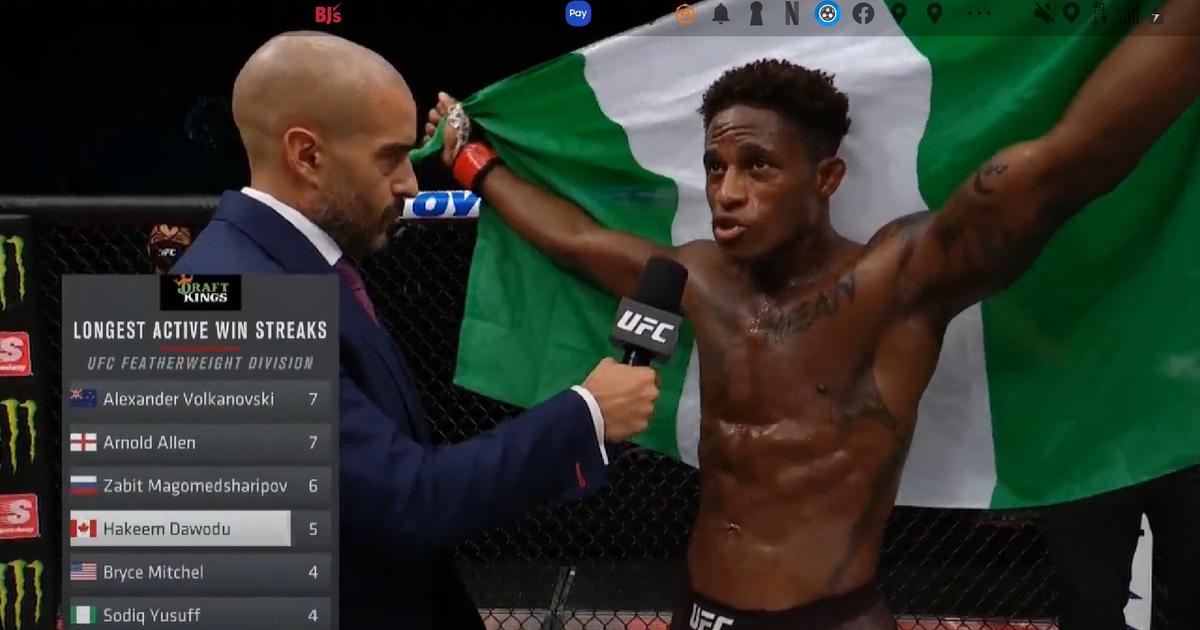 “They only allowed me to bring one flag, so I’m really sorry for not bringing the Jamaican and Canadian flags but you know what I represent,” he said.

Israel Adesanya will surely dominate the news after his impressive knockout win over Paulo Costa to defend his Middleweight title, but Dawodu was another Nigerian that flew the Nigerian at UFC253 at the Flash Forum on Yas Island in Abu Dhabi.

In a fight that opened the main card of UFC253, the 29-year-old defeated Russian fighter Zubaira Tukhugov via split decision in the Featherweight division.

The win, his fifth on a roll, continues his ascendancy in the UFC after the loss on his debut in March 2018.

Born in Canada to a Nigerian mum and a Jamaican dad, Mean Hakeem as he is widely called identifies with all of his roots. For the UFC253, it was his African roots.

“This was one of the first fights I felt I was fighting for somebody bigger than myself,” he said in his post-fight interview.

“All my black people, all my African people, everybody oppressed, they tried to make fun of us. They are trying to bring us down. I refuse to kneel.”

His latest win in the UFC goes in line with Adesanya’s prediction that Nigerians will one day take over the MMA and UFC.

“It’s something that I have known all along cause I’m a Yoruba Boy, I’m a Naija boy, there’s something about us that is different and like I said, it’s just getting into a point where it’s like Nigeria is trying to get privy to MMA,” Stylebender told Pulse in a recent interview.

“It’s time to know what it is. Once they know that football isn’t the only way to express yourself through sports and that you can actually do this in mixed martial arts, I think it’s game over for everyone.”

Aside from Dawodu and Adesanya, Nigeria also has other fighters in the UFC. There is Kamaru Usman who is dominating the Welterweight division, Sodiq Yusuff who is quickly making a name for himself in the Featherweight division and heavyweight fighter Kennedy Nzechukwu.

Adesanya himself made sure Nigeria was all the way victorious with a second-round knockout of Brazilian Paulo Costa in the main event.