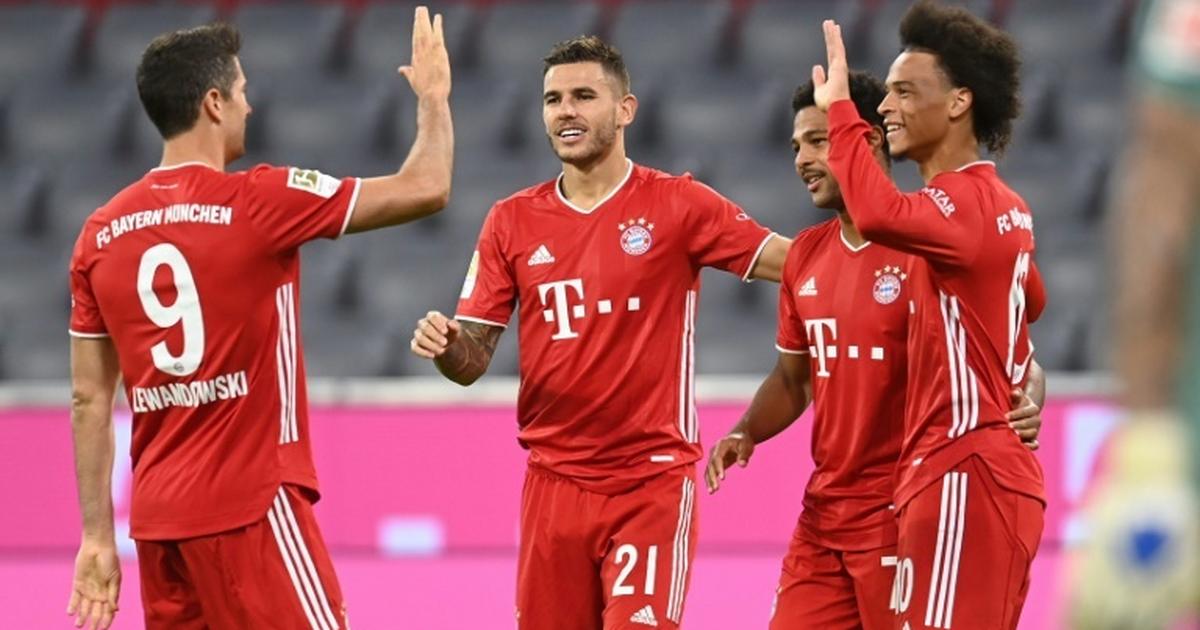 European champions Bayern Munich returned to action 26 days after their Champions League triumph in Lisbon and began their Bundesliga campaign in style with an ominous 8-0 destruction of Schalke at an empty Allianz Arena.

Serge Gnabry scored a hat-trick for Hansi Flick’s team as they claimed a record victory for the opening weekend of a German top-flight season and suggested it is going to take something extraordinary to stop them winning a ninth consecutive Bundesliga title.

Having won a treble last season, Bayern picked up where they left off and have now recorded a remarkable 22 straight victories.

“We’re still hungry,” insisted Leroy Sane, who was making his debut after arriving from Manchester City.

While Thiago Alcantara has left for Liverpool, Sane’s arrival adds extra quality in the final third and it will be a big ask for anyone to keep up with the pace set by Bayern.

However, Borussia Dortmund impressed in their 3-0 win over Borussia Moenchengladbach and RB Leipzig were also victorious in their opening game. And Bayern’s win does come with a caveat: a dreadful Schalke side were merely picking up where they left off at the end of last season in failing to win any of their last 16 Bundesliga outings.

All eyes were on Andrea Pirlo as the rookie coach took charge of Juventus for the first time in their Serie A season opener against Sampdoria in Turin.

Juventus began their bid for a 10th straight Scudetto by beating Claudio Ranieri’s side 3-0 and a new face delivered the first goal of the new era, with 20-year-old Swedish winger Dejan Kulusevski’s classy finish putting them ahead before Leonardo Bonucci and Cristiano Ronaldo also netted.

“It will take time. We lack players but we’re trying to do the best with what we have,” said Pirlo, who has not had long to settle in after replacing Maurizio Sarri in August.

Another new face in the Juventus team on Sunday was Weston McKennie, the USA midfielder signed on loan from Schalke.

Paris Saint-Germain have had a slow start to the new French season, their hangover after losing the Champions League final worsened by a raft of coronavirus cases and then a series of suspensions following an ugly brawl at the end of last week’s home defeat by Marseille.

But after losing their first two games of their Ligue 1 title defence, PSG edged a 1-0 win over Metz before looking more like themselves against Nice on Sunday in a 3-0 victory.

It was no coincidence that the game marked the return of Kylian Mbappe after a spell on the sidelines following a positive coronavirus test.

The World Cup winner won and then scored the penalty which gave PSG the lead, and made the second goal for Angel Di Maria just before half-time in PSG’s 500th game since being taken over by Qatar Sports Investments in 2011.

“What he did was impressive,” said Paris coach Thomas Tuchel. “He does extraordinary things.”

Spanish champions Real Madrid began their La Liga title defence — and the post-Gareth Bale era — with a flat 0-0 draw away to Real Sociedad and the headlines on Monday morning summed it up: “Without punch”, said sports daily Marca, while As called it a “debut without gunpowder”.

With Norwegian starlet Martin Odegaard starting against the side for whom he impressed on loan last season, but with Casemiro on the bench and Eden Hazard absent altogether, Zinedine Zidane’s men could not find a way through and there are legitimate questions about where this Real side really stands without any major new investment forthcoming.

“We defended well and were a little bit lacking up front, but we will work on that. We need to be calm,” said Zidane.